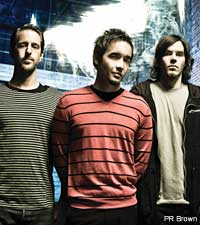 Hoobastank may have sold a serious amount of records thanks to some hard work and a string of radio hits, but they know how to let loose. "Although we take our music very seriously, we don't take ourselves very seriously," frontman Doug Robb tells Noisecreep. "We've always loved goofing around on and off the stage."

The band's antics have resulted in an assortment of live treats for their fans, including covers of the 'Rocky' theme song, Pink Floyd's 'The Wall,' Journey's 'Don't Stop Believin'' and ... Ray Parker Jr.'s 'Ghostbusters.' Says Robb: "We played our own shortened version of it at a few shows, and the crowds went berzerk! Seriously, it was so funny that half the time, I couldn't hold it together and would laugh in mid-verse."

"So seeing the crowd's reaction to the song," Robb adds, "and it being so close to Halloween, we decided to record it for fun at Chris' -- our drummer -- home studio. We had a lot of fun recording it, and we hope everyone has fun listening to it. Happy Halloween from Hoobastank." Listen to the song after the jump.