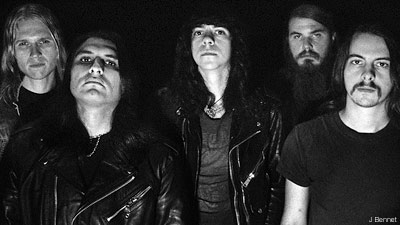 As both the metal and the gamer communities gear up for the Oct. 13 release of 'Brutal Legend -- the much anticipated action/adventure game that features heavy metal roadie Eddie Riggs (voiced by Jack Black) on his quest to save the world -- the onslaught of ads ensue.

Luckily, Gamestop has taken matters into their own hands and enlisted heavy metal vocalist James Paul Luna formerly of White Wizzard, currently of Prosthetic Records' latest signing Holy Grail to take the mic and let us know about "The Axe."

The song tells the tale of an exclusive pre-order perk for Gamestop shoppers -- the Tenacious D axe guitar. Given the context, speculations are high that Jack Black is singing, even though the commercial warns the song is not performed by Tenacious D.

James Paul Luna tells Noisecreep, "Jack Black wasn't involved at all. These guys at [music and sound design firm] Wojahn Bros. write music for TV and film ... and when it came to vox, they needed a guy with real old-school heavy metal pipes, so through the grapevine they found out about me, and I was contacted to come in for the session."

Luna gives more insight into the experience, saying "I did multiple variations on style from King Diamond or Paul Di'Anno to Dio and [Rob Halford], and then we went and did a really mellow cleaned up version ... They ended up splicing together the mellower parts for the client ,but overall it was pretty sick to be in the 'pro session guy' realm."