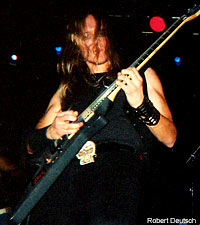 Dec. 11 is a Friday night, and Los Angeles' Holy Grail just returned from a successful North American tour. What else is there to do but play a welcome home show at the famous Whisky a Go Go (the venue that helped launch the careers of the Doors, Alice Cooper and Guns N' Roses to name but a few) on the band's home turf, right? Throw in one or two hundred metal-hungry headbangers, and you've got a successful scenario -- at least if you're in L.A. and looking for something to do on a Friday night. "It's the only thing I like to do," guitarist James J. LaRue told Noisecreep of writing, recording and touring with Holy Grail.

Galloping through a slurry of solo-laden tunes from the band's current EP, a few songs hoping to make the cut for the band's debut full-length and two choice cover tunes, Holy Grail vocalist James Paul Luna's voice was both spot on and hitting every falsetto scream, while also encouraging the crowd to take on a Friday night of metal to greet the band back home. "It's Friday night and it's time to let our hair down!" Luna exclaimed to the crowd before the band broke into its first song -- and the crowd into its first circle pit.

Holy Grail, with their seven song set, re-established that they're maybe one of only a few in the current crop of bands throwing back to an older time in metal that has the clout to allow them to both wear their influences on their sleeves -- and play them, too. Without simply rehashing the sound or the songs, the band's cover of the Judas Priest classic 'Exciter' was both spot on and refreshing, with an almost completely new, infinitely heavier ending. Add in Accept's classic speed metal anthem "Faster Than A Shark" and several songs only currently available on the band's blossoming MySpace page ('Immortal Man,' the 'woah-oh-ho-oh' chorus of 'Fight to Kill,' and the chant anthem and rhythmic gymnastics of 'Call of Valhalla'), and the set was not only lively and energetic. It was flat out fun.

Guitarists Eli Santana and LaRue traded off more solos than anyone could shake a stick at, bassist Blake Mount joined the battle on stage for some classic triple axe stage moves that would make Judas Priest proud and Luna's charismatic swagger were all held in check by drummer Tyler Meahl's surprisingly heavy double bass assault on the band's first hometown show in some time. (They played Anaheim a week prior, but you wouldn't have known.) It was quite the step up from an early performance as their previous moniker, Sorcerer, at Hollywood's tiny Relax Bar just prior to the band in March of this year.

"I don't think about it down the road 10, 15 years. I just want to focus on Holy Grail," LaRue later told Noisecreep. "Let's just try and make the raddest extreme music with the vocals, the guitars ... It might not happen, but we'll keep trying to make the best music."

It also probably doesn't hurt to have your first major tour in support of an EP, either. Having just returned from the band's first tour as the openers alongside like-minded metallers 3 Inches of Blood and Saviours a few days earlier, Holy Grail's homecoming was mere days after returning from the road. "With each show the crowds got better," Holy Grail vocalist James Paul Luna reassures Noisecreep of the tour's turnout. "Bigger, more people knew the songs."

With plans to hunker down and complete writing for the band's debut full-length -- along with recording early in 2010 -- Holy Grail is now at home, having recently released the 'Improper Burial' EP through Prosthetic Records in November. Released on both seven-inch and CD, the vinyl pressing includes two original tracks, while the CD pressing features the band's takes on 'Exciter' and 'Fast as a Shark.' Meanwhile, Holy Grail informed Noisecreep that they'll next play with fellow Los Angeles bands Professor and Gypsyhawk Feb. 8 at L.A.'s Le Deux, with hopes to finalize some 2010 domestic touring and lock in some European dates. They're shooting for a summer release of their forthcoming full-length.