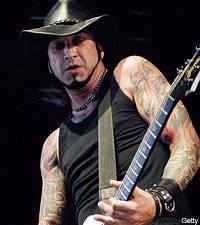 "Hellyeah is what I am wicked passionate about. I see results and when I am in the band, I go to work, shoulder to shoulder with my bandmates, in the war," Hellyeah (and former Nothingface) guitarist Tom Maxwell told Noisecreep. Maxwell and company will go back to work in Hellyeah -- which features members of Mudvayne and drumming legend Vinnie Paul of Pantera fame -- in September, after vocalist Chad Gray and guitarist Greg Tribbett finish their Mudvayne touring cycle.

"When that [process] starts, I will [be] on the road for the next two years," Maxwell said. "Me, Greg and Vinnie recently got together first to see what direction we can take the record. The first week, we wrote five songs. It has a lot of continuity to the first record, but it's still a heavy, riff-driven sound. But hook after hook after hook is what I am after. I want every song to be undeniable."

Maxwell said the band's time writing in Texas was spent enjoying one another's company and writing an average of a song a day, with he and Tribbett "feeding off one another."

He also revealed that "the new Hellyeah record will have the same properties of one the one before it, but with a fresher vibe and more fire, since we know who and what we are." When not pounding the pavement in Hellyeah, given that all the band members have other bands, Maxwell stays creatively stimulated with other projects. "I also have a side project called Knives Out," he said. Knives Out features ex-Nothingface drummer Tommy Sickles and vocalist Todd Smith, which is, coincidentally, the birth name of rap guru LL Cool J! This Todd Smith, however, is late of the quirky, Mr. Bungle-esque band Dog Fashion Disco.

"We self-financed the record, 'All American Killers,' and when we first played together, my attitude was that I wanted to get together with my friends and have the same mentality in Knives Out that I have in Hellyeah," Maxwell muse. "It's, 'Let's have fun and release some demons.' But once we recorded the first few Knives Out songs, it was like damn, there is something there. We wrote, played some shows, and it has turned out to be bad ass. We don't have a label or management, but we'll see. It's fun."