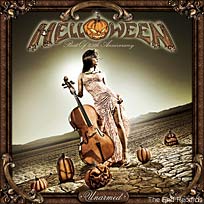 "We aren't one of those bands who like to celebrate themselves," says Helloween guitarist Michael Weikath. "We wanted to say thank you in a special way to all our fans who have followed us through the past 25 years. To us, this album stands for an official celebration."

The forefathers of power metal are back with an album celebrating a long career called 'Unarmed -- Best of 25th Anniversary.'

Listen to 'If I Could Fly'

The non-traditional greatest hits album encapsulates the band's 25-year history into 11 classic melodies, all rearranged. The album also features some guest appearances including the 70-piece Prague Symphonic Orchestra. With the orchestra, the members of Helloween created 'The Keeper's Trilogy,' a 17 minute medley of 'Halloween,' 'Keeper of the Seven Keys' and 'The King for a 1,000 Years.'

'Unarmed -- Best of 25th Anniversary,' is being released via The End Records, and it will hit American stores March 30.