Helloween bassist Markus Grosskopf checked in with Noisecreep as the band prepares for the release of Straight Out of Hell, their 14th album, and some touring, including the 70,000 Tons of Metal cruise which sets sail on Jan. 28.

He also revealed why the band has been absent from the American touring market for four years and why he continues to make a metal racket in Helloween after all these years.

Grosskopf has been a member of the Helloween since 1984, so it's been nearly three decades of German power metal dominance.

Helloween will board the 70,000 Tons of Metal cruise and have a new album coming out in a few weeks. It must be an exciting time for you.

Everything about being in a band is exciting – another record, another time to go on tour. We start touring and have a couple of shows. We do the 70,000 Tons of Metal show in Miami. That's what we are going to do and then some festivals in Germany. We are running into a big tour, which starts end of January.

Have you ever performed on a ship before?

That is something that is very new for us. We were amazed by it, when we heard that Gamma Ray was doing it before, we thought it would be fun. It will be fine.

Do you worry about getting seasick? Will all that rocking back and forth and the motion of the ocean cause you to puke, especially when trying to perform?

I am used to being on a boat, since I fish. We know boats, since we do Scandinavian trips. We book things on a boat; we sleep on a boat. There is a boat almost every night for transport during European touring. Big boats don't move that much. I am used to the motion and I am ready for the boat!

And about this touring - when will America get to experience Helloween again?

It starts in January and it takes us through the rest of the year. We may even come to North America. There are plans, but there has been no final decision. It is a matter of arranging it. We don't know yet. There are plans. Then we do Asia. We do a lot of Europe, and keeps us busy.

How come it has been a while since you've played the U.S.?

It's been four years. We did Chicago, Los Angeles, the House of Blues clubs. Stuff like that. I like those venues. We don't have a big following in the U.S. like we have in Europe. It's a little more complicated. You need visas. It costs a lot of money. We don't play the same big venues. It is a matter of arranging it and the financial sector. It costs a lot to get a working visa. We need to go there for more than a few weeks, and you can't go with a tourist visa, since you are earning money. But we will try to make it work.

Ah, so that makes sense. Can you give us a little insight into the new album which is on deck for January? The first single, 'Nabataea,' just hit the Internet.

The new album is out at the end of January, and it's called Straight Out of Hell. I can't choose a favorite song; it's hard to say. It's not fair to the other songs if you just pick one. I haven't got a favorite yet. Ask me in a half-a-year, and I'll have a favorite, since I'll have played it out live. It's too new to pick a favorite.

Helloween has been a band for a long time, as you prepare to release your fourteenth album – what keeps it fresh? Why do you still do it?

There were times in the past when we said we'd never come back, we are down and out. Then Masters of the Rings came out [in 1994] and we came back big time. We can do that again. Here we are, you can't stop us now. That's the attitude we have and will have. 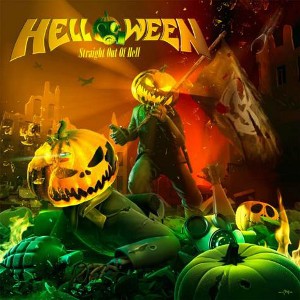