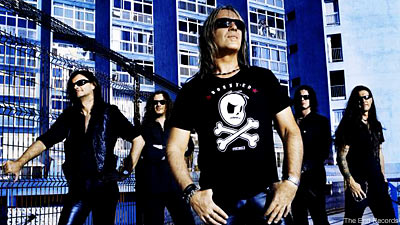 "You don't start something like this thinking it's going to be over in two or three years,' Helloween bassist Markus Grosskopf tells Noisecreep of his band's staying power. "You start writing songs and creating ideas that last much longer than this; you try to at least. But then on the other hand, 25 years is such very little time. And it's good, it seems very good that you're still being there, still touring, still doing music, still being able to write and you play and stuff like this and tour and stuff like this. It's very nice."

While Grosskopf might think 25 years isn't very long, most bands would disagree and love to have that sort of legacy. To celebrate a quarter century together, Helloween recently released 'Unarmed: Best of 25th Anniversary.' The album features some of Helloween's best-loved songs completely reworked. Grosskopf admits completely redoing classic songs is a bit unorthodox, but says it is important to give fans what they want.

"We weren't quite sure what to do because just to re-record an album with different songs or remix an album was kind of boring for us," Grosskopf continues. "[Our] management had the idea to do something with an acoustic set or something with an orchestra."

The track 'Keeper's Melody' is nearly 20 minutes in length with full orchestration. While the band hired out the orchestral arrangement, the vision of a bombastic piece came from Helloween. Of course, orchestras aren't usually known for being metal, so was the band concerned about upsetting die hard Helloween fans? The answer is easily "no."

"It's just like if you feel like doing something special for such a reason, you have to go for it. If you're scared, then you shouldn't be in this business; if you're scared about somebody hating what you do, then you try to make it right for everybody and that's not going to work. So we try to make it correct for what we think is cool."

In the end, Grosskopf says Helloween's success might be directionally proportional to the band's refusal of failure.

'Unarmed: Best of 25th Anniversary' is available now via The End Records.