For the longest time, female metalheads were stuck with buying small-sized hoodies or t-shirts of their favorite bands. The cuts weren't exactly flattering or feminine, but lady headbangers made due, either cutting them or hacking them up for a better end result. Or worse, wearing them as is.

But what about real metal couture? What about shirts, tunics, cardigans and dresses designed from simple t-shirts that you can't get at Hot Topic? And we're not talking Linkin Park or even Slipknot tees. We're talking Darkthrone and Burzum.

Rebecca Conrad designs beautifully grim metal attire with leather and lace accents via her Hell Couture Etsy shop. Noisecreep spoke to the fabric mutilating metal fan about her booming, burgeoning (or is that "Burzuming?") business. Her aesthetic is "witch-lady hessian" and she's cornering a market and filling a white, er, black space.

You make beautifully grim hoodies, tees and dresses out of extreme metal t-shirts. How did you get into mixing metal and fashion in such a unique way?

With sites like Etsy and the crafting/DIY craze that's been going on the last few years, there's so much great stuff to be found online, but, and I'm gonna date myself here, that wasn't the case when I was growing up. In high school, I started cutting up my band t-shirts to be fitted. They definitely weren't well-made; I was just hand-sewing the sides together with no regard for measurement or technique. It was hard enough, especially growing up in the suburbs of Pennsylvania, to get my hands on a Burzum shirt back then to begin with, let alone one that fit me. I really just started sewing out of necessity because if I didn't want to wear giant dude shirts of the bands I liked there was no other option. 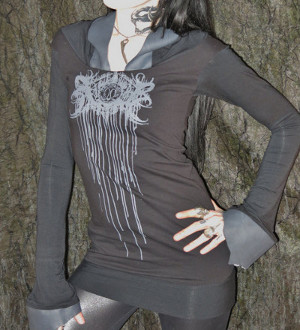 Can you share a little insight into the creative process? What bands you choose? Do you just start with a t-shirt and go from there?

Lately, I mostly just work with black metal shirts. In the very beginning, I was all over the place doing pretty much any heavy metal shirts I could get my hands on, as well as horror movies. I truly love all kinds of heavy metal, but the tiny market of DIY metal girls clothing has gotten a little cramped, so I decided to stick with mostly black metal these days, since it's my own personal favorite.

I find that I get a lot more creative with that stuff, also. It's a lot easier for me to come up with ideas for clothing working only with shirts I would actually wear. I decided at some point in the last year to never make anything that I wouldn't want to keep if it didn't sell.

Usually I'll throw on whatever band whose shirt I'm working on and just kind of do whatever comes to mind as I'm listening to their music...I dream about clothes pretty regularly, actually. Sometimes I even just go to the mall and wander around trying to picture everything if it was made out of a Sargeist shirt instead. It's really helped my creativity to force myself to look at everything differently.

Your stuff is fashionable and designed, and obviously, custom cut. Was the lack of female-friendly attire part of what inspired you? How have you been able to turn the world onto your designs?

Yes, very much so. As I said before, I basically taught myself how to sew out of necessity because it was the only way for me to wear particular band shirts at the time. Now, it's much easier to come by. That being said, because girls metal clothes are easier to get now, I don't want to just do the same things the bands themselves are producing, which is why in the last year or so, I made myself up the creativity and definitely master a lot of sewing skills I had previously ignored, being self-taught. I really want to make things that are not available anywhere else because I assume (I hope!) there are other girls like me out there who don't just want to wear a baggy t-shirt, and maybe they don't want just a plain tank top with a logo either. 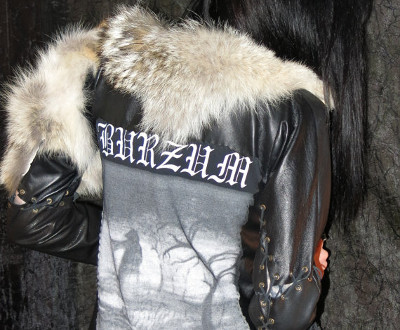 What are some of your favorite metal bands?

Oh, that could be a tremendously long list! Mercyful Fate and King Diamond are at the top; Melissa, Don't Break the Oath, Abigail and Fatal Portrait were all real life-changing albums for me. They came along at just the right time and piqued my interest in just the right way. Burzum -- same thing. The first time I heard Burzum, I was just like, "Oh...this is EXACTLY what I want to be hearing all the time." When I was young I used to go buy Kerrang! from the independent book/record store in my town, and I just became obsessed with Burzum and Varg. That store would special order things for you, so I saved up for all the Burzum I could get my hands on, then Bathory and Von (because he was wearing those shirts in the pictures from the trial), and it just went on from there. I was pretty young, but this was prior to the Internet being so accessible, so I really had to do my research.

My other favorites include Horna, Sargeist, Satanic Warmaster, Pest, Inquisition, Mortuary Drape, Grand Belial's Key, Absurd, Craft, Armagedda, Hate Forest, Urgehal, Cornigr, Mutiilation, Graveland, Katharsis...this could go on forever. I also have an undying love for W.A.S.P., Judas Priest, Grim Reaper, Helloween, Twisted Sister and on and on...that was what I grew up on, stealing my older brothers' cassette tapes. I love hair metal and power metal in general but W.A.S.P. and Judas Priest I can probably say at this point I will never tire of and would love even if I heard them for the first time today, without the nostalgia factor. 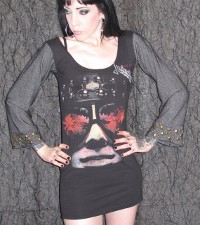 Have the bands seen your designs?

Yes! One of the absolute most rewarding things about this whole venture is that a bunch of the bands have seen my stuff and (so far) they've all been really stoked on 'em! It's been a tremendous honor to be in contact with some of these dudes and have their seal of approval on what I'm doing. Of course, if a band were ever to contact me and tell me they hated what I was doing, I would 100% respect it and take those items down, but so far, so good. Also, I love to buy the t-shirts I start with directly from the bands, if possible, so it's been nice to be contacted from so many of them and be able to support them that way.

Visit hellcouture.etsy.com for one-of-a-kind, custom made clothing; new items listed every Sunday at midnight (EST). No custom orders due to time constraints, but she is always open to suggestions on styles. New things coming in 2013, including those which are not band-affiliated.