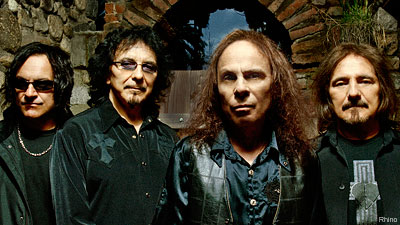 Featuring Ronnie James Dio, Tony Iommi, Geezer Butler, and Vinny Appice, Heaven and Hell is essentially the Black Sabbath line-up that was together from 1979-1982 and then again in 1991-1992. After the success of their 2007 and 2008 reunion tours, the quartet decided to use the new moniker and enter the recording studio. Hitting store shelves on April 28, 'The Devil You Know' is Heaven and Hell's official debut album but the crushing results could have only come from master veterans like these.

In our tireless pursuit of providing our readers with the hottest exclusives in metal and hard rock, Noisecreep has gotten its hands on "Bible Black," the first single from 'Heaven and Hell.' The molasses-thick riffs, slow-burning tempo, and Dio's instantly engaging vocal melodies hit hard and will surely silence the naysayers who doubted the band still had the fury to pull off such a heavy statement. If this song is any indication of what lies ahead for us, 'The Devil You Know' is going to be one ugly bastard of an album!

Metal History: When Black Sabbath's original singer's life became completely unmanageable due to a colossal addiction to drugs and alcohol, the British combo were forced to fire him. The only problem was, the guy in question happened to be Ozzy Osbourne. The split would prove to be one of the most significant moments in heavy metal history.

Luckily for the band and ultimately, the listening public, their manager's daughter (ironically Sharon Arden, who famously would go on to marry Ozzy) suggested former Rainbow and Elf frontman Ronnie James Dio and the band wisely took her advice. The change of guard injected fresh energy and vitality to Black Sabbath's new material and gave the future Rock and Roll Hall of Fame inductees a new lease on life. The combination of Tony Iommi's meaty guitar riffs and Dio's soul-stirring vocals is one of rock's unholiest unions. Sabbath would go on to make three essential studio albums with the American singer spread out over a decade.