San Francisco has long been a hotbed for thrash metal since its earliest days in the mid-'80s. It's no surprise that the area spawned Hatchet. First appearing on the scene in 2007, the group released Awaiting Evil, their debut album, one year later on the Metal Blade label.

Recently signing with the folks at The End Records, Hatchet will be attacking record store shelves again next month with the release of Dawn of the End, their sophomore album. Today, Noisecreep has the pleasure of presenting the exclusive premiere of the album's killer title track!

"The title track 'Dawn of the End' is about the end of all mankind or a total apocalypse type of song," the band tells Noisecreep about the song. "One could depict in many ways, but to us it stories what we might see at the end of the world. God hanging his head in shame as the world tears itself apart. One of my favorite lines reads, 'Troops line the streets, directive shoot to kill!' Always been a fan of apocalyptic type of scenes and lyrics. Very metal!'

Listen to 'Dawn of the End' 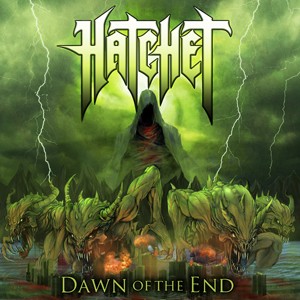 Dawn of the End will hit stores on March 5th and can be pre-ordered at this link.