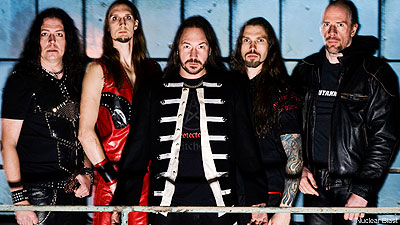 If Hammerfall guitarist Oscar Dronjak wasn't knuckling down on his axe, he'd be working with animals. "I like animals very much and if I chose my career 20 years ago, I would have chosen a zoologist -- to work with animals in the wild and the zoo. I think they are much better than people," Dronjak told Noisecreep.

Dronjak revealed his love of creatures right after U.S. news networks were abuzz with talk of a whale attacking its trainer at Sea World late last month. "I hadn't heard about that story until you told me," Dronjak said when we told him newscasters were questioning what would cause the whale to turn on its trainer like it wasn't said animal's natural born instinct. "News like that doesn't travel instantly. But it's ridiculous to assume that they wouldn't kill people! Instinct kicks in, because they are wild animals. Even domesticated dogs behave that way if triggered."

Speaking of dogs, Dronjak, a dog owner, is also a fan of Cesar Millan, the famed Dog Whisperer with his own TV show. Millan rehabilitates aggressive dogs through psychological methods. "When I first saw him, I thought, 'What an idiot!' Then I listened to what he is saying and realized he is just brilliant," Dronjak said. "I'd like to meet him and talk to him about dogs to see how he works. He is fantastic."