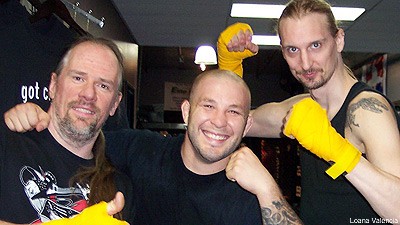 Many metal dudes – Atreyu's Alex Varkatzas, DevilDriver's Dez Fafara, Converge's Jake Bannon -- dig the world of MMA and particularly enjoy the intellect and singularity that goes along with engaging in hand-to-hand combat. Drummer Anders Johansson and guitarist Oscar Dronjak of the power metal warriors Hammerfall paid a visit to Bas Rutten's Elite MMA Gym on March 27 while on tour in support of their 2009 release, 'No Sacrifice, No Victory,' which sounds like an MMA anthem to us.

The pair partook in an afternoon workout with mixed martial arts class instructor James Singler and then enjoyed a few hours of rest before they performed a 90-minute set rife with power metal battle cries, replete with three (three!) encores at the House of Blues in Hollywood, Calif. Mixed martial arts workouts and three encores? Hammerfall have boundless energy, if they engage in all that physical activity in the span of a day. Playing over an hour of power metal is certainly taxing on the body.

In a statement, Dronjak offered details about the MMA workout session, which he and his bandmate were thrilled about but which they also approached with caution, since they're bodies, namely their hands, are also their money makers. Dronjak said, "We were both quite nervous since we really had no idea what we were going to have to do, and obviously didn't want to get hurt doing it. The first thing we saw upon getting there was an advanced muy-thai class in the next room, where someone with a busted nose was bleeding all over the mat but still continued to do push-ups." Now that's what we call tough! Luckily there were no busted noses during the duo's session.

A three-minute video clip of their visit -- shot and edited by Rick Lee -- can be viewed online. The photo above also features MMA fighter and Hammerfall fan Josh Souder, who attended the House of Blues show.

Metal and MMA are a well-matched pair.