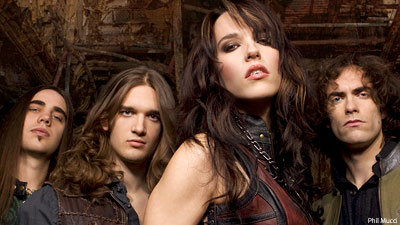 Female-fronted rock dynamo Halestorm rolled into not-so-scenic Asbury Park, NJ to film the video for their signature song, 'It's Not You.' Halestorm rocked out while sexy roller derby chicks whizzed by. With this video, Halestorm take rock 'n roll...quite literally. The band rocks, the chicks roll! Even frontlady Lizzy Hale gets in on the skating action. Guitarist Joe Hottinger told Noisecreep, "This video is the closest to Halestorm on Ice you'll ever see!"

While it certainly isn't Halestorm-on-Ice, it is a fun, whipsmart video! "This was such an incredible video to make. We had so much fun! Thank you so much to the Jersey Girl Roller Derby team and director Phil Botti for being a part of this," Hale told Noisecreep. "This video really highlights the power and bad ass-ness of chicks, which is something that is a part of us, but that we've never really put into video. We'd also like to thank Atlantic Records and our management InDeGoot for believing in us and enabling us to make this video. 'It's Not You' is six-years-old, and has been one of the Halestorm staple songs. It is so amazing to now see the debut of this video. It is triumph and milestone for the history of our band!"


Drummer Arejay Hale also commented to Noisecreep, saying "It's one of the best days ever. Never before have I been in the same room with 26 hot girls who all wanted to bust skulls! Glorious!" Bassist Josh Smith admitted, "There is so much energy to this video! Phil 'The Body' Botti, knew exactly how to capture all the elements ... ahem ... The Storm!"

Be careful you don't get run over by a hot derby girl!