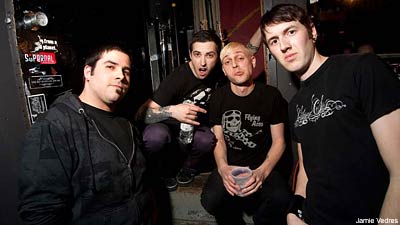 Hail the Villain's debut album, 'Population: Declining,' has been in the can for a couple of years, and now that they are signed with Warner Music in Canada and Roadrunner for the rest of the world, you would think the Canadian hardcore band would want to hurry up and release it -- except they have ambitious plans.

"It has to do with the level of release that we want," explains frontman Bryan Crouch. "We didn't want to shoot an average music video so we decided to do a fully animated movie to the record. It took us forever to find a company that would be willing to do animation for the kind of money that a record company in Canada could come with. That's why the release is delayed."

That company, Rune Entertainment, which has offices in Toronto and Singapore, has just about finished the animated video for the song 'Take Back the Fear' and will soon begin work on the second one. Each takes about four to five months to do.

"A movie has been written to the whole record, so what we're hoping to do is animate the entire movie video by video," Crouch says. "All the videos are going to be released with this animation, and not just Kanye West-type animation, but full out 3D."

The videos will be seen as stand-alone pieces on video outlets, and the first will be released as the second is being finished up or the third has been started. Eventually, all the videos, or "episodes," as Crouch calls them, will be tied together to make the film.

"It's not going to be like Pink Floyd's 'The Wall' where it makes no sense; it's along the lines of 'Spawn' or 'The Crow' where there's a story between good and evil, but with our own twist on it for sure. It's a very dark and mature type of thing," says Crouch. "There's a main villain named Sire, and there's a main character named Drake Carter."

To complete the entire movie still requires investors, says Crouch. "As far as Rune is concerned, they're pretty confident the way things are looking that someone will want to jump on.

"What basically happened is we wrote the record and thought, 'We'd like to do a comic book. That would be kind of cool.' People have done that, but then we just got the idea, 'Well, what if it became a movie?' thinking it's a ridiculous idea, and Warner jumped all over it. And before we knew it was becoming a reality, so that's where it's sitting right now."

Ron Burman, senior VP of A&R at Roadrunner, is excited about the creative multi-media elements to this band. "It's being made with Warner Canada and Rune Entertainment. They are providing us with the finished product, but I have to say what I've seen thus far has been pretty amazing. The video and their new Web page, and all of the animation, is really impressive and cutting-edge technology."