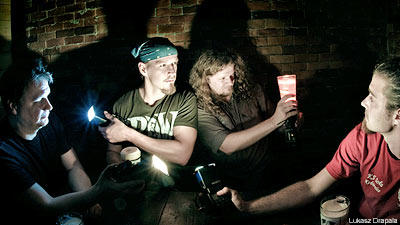 On Oct. 27, Gwynbleidd, a band that formed back in 2002, will issue its debut LP, 'Nostalgia,' an impressive, punishing collection of progressive black metal that's imbued with slight black and folk metal elements. The album is a real monster, and Noisecreep is proud to be able to bring you an exclusive first listen of the forthcoming disc. The track's called 'Stormcalling.'

The band, comprised of Polish immigrants who now call Brooklyn home, is one of a handful of New York City metal bands trying to make a name for themselves in a metropolis most might label 'hipster central.'

"My theory is, you're never too hot where you're from, but you're hot when you go away," says guitarist Maciej Kupiszewski, who picked up his instrument after the first time he heard the majesty of In Flames. "You leave the city, and suddenly, you're this band from New York. In New York, it's lousy, in a way. You're just another band from New York and that's how people perceive you. But the moment you get out, and go to Canada or Poland ... you're this band from New York, and that's cool. If we were a band in Poland from Poland, there'd be nothing special about us. We'd be just another band."

Gwynbleidd (pronounced 'gwin-blade') aren't fans of Brooklyn's music scene, and they're not so thrilled about being compared to Opeth, which is something Kupiszewski says happens all too often.

"Every musician wants to get to a place where you don't necessarily get compared heavily to anyone," he says. "The way I try to make positive of it ... I think some of the comparisons are overblown, but I'd rather sound similar to one or two bands and not really be comparable to a whole genre. You see so many bands out there these days that are just playing within the genre, and not really offering anything new on their own. I feel very good about the type of music that comes out of us, and we have our own vibe on this record. That's not to say that will be the vibe on the next record. But for what it is, I am happy with how it turned out."

This fall, Gwynbleidd -- rounded out by singer and guitarist Michal Kacunel, drummer Adam Romanowski and bassist Jakub Kupiszewski -- plan to return to Canada for a string of headlining dates. Last year, the band played before 1,600 people at Paganfest in Montreal, and they got a healthy response. Other than that, the band's looking to book an opening slot on a bigger tour, but have no leads at this time. What if the guitarist had his way, though?

"There are so many really good bands from Europe I'd love to tour with ... we would love to play with Carcass or At the Gates," Kupiszewski says. "If Emperor was doing a tour, we'd hop on that any day ... I'd piss my pants if we got a tour like that."