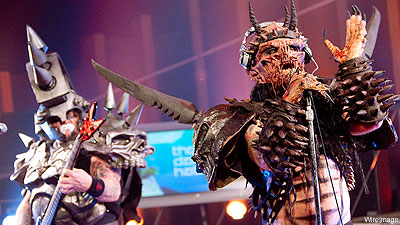 The interplanetary warriors of Gwar just can't get enough destruction, mutilation and semen-spilling. On June 1 they'll launch the newest leg of their 'Lust in Space' tour in Toledo, Ohio. They'll continue carving a trail of mayhem and bloodshed through North America until June 6 in Rutland, Ohio.

"This is what we like to call the Tertiary Tornado Tour," said guitarist Balsac the Jaws of Death. "This is the tour where we hit all the places we missed the first time across the U.S., from a host of reasons ranging from bad weather, poor directions or venereal diseases. Many people in these cities think they have escaped the wrath of Gwar, while others pray for our arrival. One thing is for sure ... everybody's gonna die!"

In a freak happening, Gwar were invited to take part in this year's Bonnaroo June 12 in Manchester, Tenn. The event also features Stevie Wonder, Jay-Z, Norah Jones, Weezer, John Fogerty, Jeff Beck, Kevin Devine, the Disco Biscuits, the Dave Matthews Band and dozens of other artists that are totally not metal. According to Gwar's press officer, the band has "publicly pledged to nasally violate the entire Dave Matthews Band."

While the members of Gwar are sharpening their blades for the tour, they'll engage in the first Crack-a-Thon, a live Web TV broadcast of insanity that will be broadcast from the JF Gallery in Brooklyn, N.Y. on April 16 and 17 from 7 PM to midnight ET. Guests include Andrew W.K., Troma films co-founder Lloyd Kaufman and the company's hero Toxic Avenger. Proceeds will benefit the band's inexhaustible drug habit.