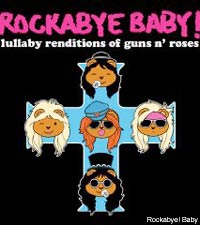 Song titles like 'Sweet Child O' Mine' and 'Don't Cry,' have always had the makings of crib room lullabies, and what new parent hasn't grappled at naptime with the notion that "all you need is just a little patience?" So it kinda makes sense that the folks at Rockabye Baby! have decided to create an album of easy listening Guns N' Roses songs, which comes out Nov. 10.

'Rockabye Baby! Lullaby Renditions of Guns N' Roses' features 12 soothing, vocal-free renditions of the band's classics performed on glockenspiel, vibraphone, Mellotron, harps and bells. Tracks include 'Welcome to the Jungle,' 'Paradise City,' 'Mr. Brownstone,' 'You Could be Mine,' 'Estranged' and 'Yesterdays.'

The tracks cover the band's catalog from 1987's 'Appetite for Destruction" through 1991's 'Use Your Illusion I' and 'Use Your Illusion II.' However, none of the songs from Gun N' Roses' 2008's 'Chinese Democracy' are represented -- maybe they were considered a little too nightmarish, even for infants.