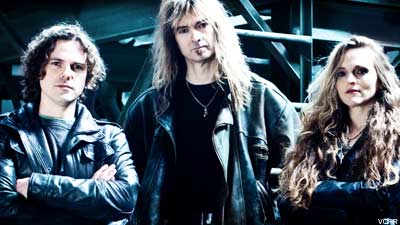 Arjen Lucassen, best known for his work with the Dutch prog rock band Ayeron, went through hell writing 'On This Perfect Day,' the debut album for his new project Guilt Machine. "I got divorced after 13 years," Lucassen told Noisecreep. "I was on my own again suddenly. I started partying like I did in the days when I was 20, which is fun when you're 20. When you're almost 50, it kind of hits you. Then I got anosnia, which is not a life-threatening thing but a virus destroyed my nerves for tasting.

"At some point, I finished the Ayeron album, which became a huge success. I crawled out of the black hole so to speak. When you actually overcome your depression, you do want to talk about it. You do want some closure and exorcise the demons. I think this album is the album for that. It's kind of like a dark album. The lyrics are very dark, dealing with guilt and regret and depression. I like to think there's some hope on the album as well. It's like a huge thunder cloud coming over."

He calls 'On This Perfect Day,' released Sept. 29, a reaction to the last Ayeron record, 'Star One.' "It was a huge album," Lucassen said about 'Star One.' "It was an over-the-top double album with 30 guests, 17 singers and a huge science fiction story. It was a bit too much and, to be honest, a bit too big. There were so many singers that I felt I couldn't give them enough space.

"As a reaction, I wanted to do an album that was a lot smaller. I wanted only one singer, no big science fiction story, more down-to-earth lyrics, less musicians, less pressure and less expectations of people." That called for the recruitment of alternative rock vocalist, Jasper Steverlinck of the Belgian rock band Arid.

"I decided that I did not want this big-name musician," Lucassen said. "I didn't want someone from the metal/prog style. I wanted a completely different singer, someone no one would expect, someone no one knows so there would be no expectations.

"I listened to loads and loads of alternative compilation albums. I couldn't find anyone for three months. Always every day I get suggestions from fans. This guy recommended Jasper of Arid, who sounds like Freddy Mercury and Muse and Radiohead style. I thought, 'OK, this guy's right. It sounds great.' I saw this guy live and he was even better than the album. Yeah, I had to have him, which was hard because he didn't want to do it in the beginning. 'Metal is not my style. Do I have to sing like that?' (he said). 'No, no you should sing like you do now.' That's the cool thing, to mix different styles. He did one track, a Pink Floyd-y track. It worked perfectly. Luckily I could convince him to do the whole album. He's great."

For Guilt Machine, Lucassen also chose to record with a different drummer, Chris Maitland (ex-Porcupine Tree). Even though the project came together nicely in the studio, Lucassen said the band has no plans to tour.

"There are a lot of reasons," Lucassen said. "No one knows him [Steverlinck]. But in his own country, he's this big star. Every album turns gold, so he's working on a new album now. He's doing a theater tour at the moment. He's really busy. Chris Maitland, ex-Porcupine Tree drummer, he's doing rock musicals, like he was doing 'We Will Rock You' tour. Getting those people together would be hard. I think the main reason is playing live, I did it for 15 years, and I see myself much more as a composer and producer than a guitar player. It's not really my passion anymore. Never say never though."