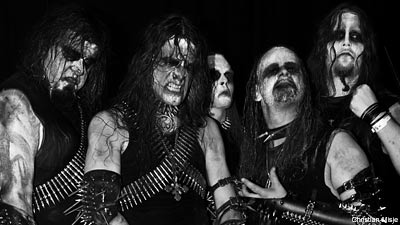 The greatest force that delayed the release of Gorgoroth's seventh studio album, 'Quantos Possunt ad Satanitatem Trahunt' was Gorgoroth itself.

On Oct. 21, 2007, guitarist Roger Tiegs (a.k.a. Infernus) announced he could no longer continue working with vocalist Gaahl (who joined the band in 1998) and bassist King Ov Hell (who had been with the group since 1999). An ugly battle for custody of the band name followed, and in March 2009 a judge awarded the Gorgoroth title to Infernus.

"I knew from day one that I would win," Infernus says. "Everybody that has been studying law for about a minute here in Norway would be able to understand that. But it took a lot of time to get through it, and it was time I could have spent on other activities."

Separated from his longtime bandmates -- of which Infernus will now only say, "they are a part of my history, nothing else" -- the guitarist spent a year recording demos and working on preproduction with drummer Tomas Asklund (ex-Dark Funeral, Dissection). Then, he called up former vocalist Pest, who had been in Gorgoroth between 1995 and 1997, and bassist Frank Watkins (a.k.a. Boddel, of Obituary fame) and asked them to join him in the studio to track 'Quantos Possunt ad Satanitatem Trahunt.'

"We spent the summer here together recording," Infernus says. "It was not difficult, it was just a matter of scheduling and making plans, which fit together because the logistics are very complicated."

Talk about understatement. Infernus is in Norway, Pest and Boddel live in the U.S. and Asklund is still in Sweden. While such demographic complications make rehearsing and touring a nightmare of satanic proportions, the band is as unified as it has been in years.

"We have very high spirits now, and we've actually been capable of rehearsing much more even though location-wise it's a lot more difficult," Infernus says. "But we have been able to have a lot of fun now and the mood is high and we're all pulling in the same direction for once, which makes us have a different kind of self esteem than we had a few years ago."