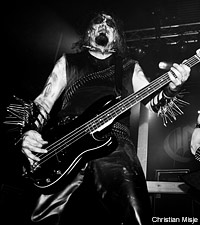 Frank Watkins is the bassist in two high profile underground metal bands: Obituary and Gorgoroth. He is able to serve both masters with equal effectiveness, though!

"It's a smooth-running train," Watkins told Noisecreep about how he juggles double duty with a Florida-based and a Norway-based band. "I book things around each other, and nothing has collided. I am sure there will come a time when it's not so smooth, since Obituary is active and Gorgoroth wants to be active. The closest it came to being not smooth was when I had an Obituary show in Portugal, and then a Gorgoroth show in Bergen, Norway. I lost my luggage, but they were amazing shows for both bands. I didn't even think about it too much. Everything went smoothly." Missing baggage aside, of course!

Watkins isn't running himself ragged with membership in two bands, either. "Infernus was such a good friend, but when we played and he gave me some new music, it set a fire inside of me," Watkins recalled. "I've jammed with other bands and helped out bands needing bassists. Nothing made me want to do another band, but I kept anticipating every moment that I'd go play or listen to music together. I also like the horror aspect. That is something Obituary had years and years ago. But we matured. Gorgoroth is still evil as hell, and I enjoy that atmosphere."

For the new album, 'Qunatos Possunt ad Satanitatem Trahunt,' Watkins didn't write material, but he did play on it. "Infernus wrote the album, and he actually wrote most of it in 2006 and had a lot of ideas and when this s--- broke out, he enclosed himself and wrote the whole album," Watkins said. "He emailed me riffs and asked my opinion. He sent me 30 riffs and pieced it all together. I practiced the whole thing and put the bass parts together. Then we met and recorded the album."

Watkins calls the album "the rebirth of the band" and that they plan on touring America a lot by the end of next year.