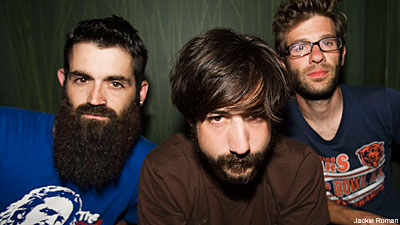 Is it possible to be a "heavy" band without being a "metal" band? One needs to look no further than New York City for the answer, where bands such as Quicksand, Helmet and Unsane have for the most part avoided the metal tag, despite being unquestionably heavy. Brooklyn's Goes Cube are poised to pick up where those bands left off with their forthcoming release 'Another Day Has Passed.' A record of considerable heft, but not really metal in the classic sense.

Having released three previous EPs, Goes Cube's earlier material was "heavy but it leaned towards the indie rock side of things," drummer Kenny Appell told Noisecreep. "As each of our EP's got darker and heavier, time just made us thirst for faster and heavier riffs and songs in general."

While Goes Cube have no problems with being called a metal band, 'Another Day Has Passed' is not all bashing drums and punishing guitars, as the band's indie rock roots pop up on several songs. "I happen to believe that there are melodic parts that are heavy as shit, not just in our band but in many bands," said Kenny. "Take Explosions in the Sky, for example. I think their music is f*cking heavy. I listen to marching bands play and when the percussion section solos, that shit is f*cking HEAVY. Even though 'heavy metal' is such a common term, the individual words don't need each other to be true."

So to sum it up, 'Another Day Has Passed' is sometimes heavy and sometimes pretty, but mostly always heavy... and if that doesn't make any sense, just listen to the record. But is it metal or is it indie rock with distortion pedals, aka hipster metal? Not so fast. "People are going to say what they're going to say," says David. "But the fact is, we started in 2003. Until about a year ago, it was uncool to use a distortion pedal in New York. Add to that, artists -- and bands are the worst -- are just so f*cking pretentious about their work. Our point is, yeah, of course we have influences. We don't hide that. But at the same time, we're not trying to be a certain thing, a certain genre, image, etc. We just do what we do. If metal is becoming hip, then hopefully we'll get more exposure. If people decide we're hipster metal, they're ignorant. You should have seen us sharing the bills with dance punk bands."

Regardless of our incessant need to label everything that comes down the pike, 'Another Day Has Passed' is a delightful foray into heaviness that is better heard than labeled. And if Kenny gets his way, the band's sonic assault isn't going to let up anytime soon, saying, "I'll be 100% happy when we're finally a death metal band."

'Another Day Has Passed' is out May 12 on The End Records with a US tour to follow.