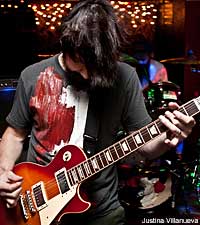 Monday nights at the Lit Lounge basement are reserved for those who wear black T-shirts with unidentifiable band names, while every other night it's the ultimate indie and experimental rock haven. Aug. 24 trod the border of both extremes, when Brooklyn mathy noise rockers Goes Cube took over the joint.

At first, the band seemed uneasy. Vocalist/guitarist David Obuchowski somberly sang into the mic, with his mouth pressed against it. Drummer Kenny Appell wildly hit his drums, like he hated everything in the world. Then, a faster riff came along and Obuchowski joined the crowd, strumming and smiling. Long-bearded Appell took off his shirt. Goes Cube was ready to really play.

"This song's lyrics are brilliant. But like all brilliant writing, it's open to interpretation," Obuchowski said before the band pummeled through a chunky mountainous instrumental piece. "You get it? There were no lyrics in that song."

If Torche, Kylesa and Fugazi mated and birthed an angry teenage boy, he'd have tantrums in the style of Goes Cube -- fast, loud, foot-stomp-worthy.

The band wrapped up a U.S. tour in July, but if you live in New York, you have a chance to see them Sept. 25 in Syracuse, N.Y. and Sept. 26 at New York City's Webster Hall when they open for the Giraffes. And if you don't live near New York, you can always watch their video for 'Saab Sonet.' The non-numbered track -- yes, the boys are growing up -- is a single off of their latest record, 'Another Day Has Passed.'