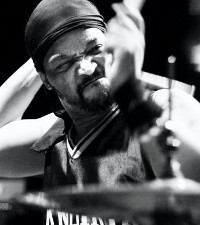 Kicking off in Broomfield, Colo. on July 13, the inaugural Trespass America Festival tour has bringing the pain with Killswitch Engage, Five Finger Death Punch, God Forbid, Emmure, Pop Evil, and Battlecross, showcasing each of their respective brands of metal madness to packed arenas across the States.

The package tour is being presented by leading U.K.-based magazine, Metal Hammer.

With the trek finishing out tomorrow at the Hollywood Paladium in Hollywood, Calif., Noisecreep asked God Forbid drummer Corey Pierce for his take on Trespass.

Corey Pierce here checking in from the road on Metal Hammer's Trespass America Tour. The tour has been absolutely amazing! The crowds in every city have been showing God Forbid and the other bands on Trespass America so much love and respect. 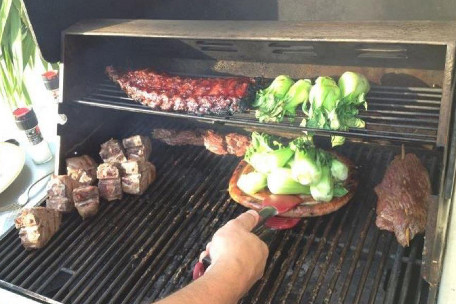 Facebook.com
However since Trespass, it has since taken on a whole life of it's own out here, and expanded into people bringing BBQ sauces, meats, and rubs out to us on the road, you can't ask for better than that! It has been fantastic bonding with so many people from all different ranges of interests and incorporating it with the metal world. What more can you ask for; great bands, great fans, and great BBQ. BBQ and metal the perfect pair!
(Click the this link for one of Corey Pierce's BBQ Stuffed Burger Recipes)
Trespass America really is about unity in metal! All the bands on the tour are having a great time and enjoying both old and new friendships. We have been having a blast playing off dates with our new friends in Battlecross, those dudes are a blast to hang out with and always have a TON of energy, which is very apperent in their live shows. Check them out, they are great!

We have been really enjoying hanging out with our label mates Emmure. In addition to doing in-stores, we are also really looking forward to playing a show together on August 23rd in Little Rock, AR, so if you live in the Little Rock area you better come out, it will be a killer show!

Pop Evil has been a welcome addition to the tour, all the guys in the band are really nice and we have all been having a blast trading tour stories. They are a great band and I really recommend you give them some love and respect when you see them play.Of course, for us one of the best parts of this tour is that we are also able to tour with some of our oldest friends in music; Killswitch Engage, (with Adam D around there is never a dull moment or a sane moment) Trivium (whom we took on their first tour ever) and Five Finger who we have had the privilege of touring with in the past and to whom we thank each and every day for putting together one of the most amazing tours we have ever been apart of.

We are now approaching, what I consider to be the best part of this tour, NJ and Philly! God Forbid is coming home and Trespass America is bringing us there in style! It's not everyday when you can say you get to play "The Rock" aka The "Mother Fucking" Newark Prudential Center! This show will be our homecoming, and we know Jersey will fucking bring it, when the dust settles there will be no question that Trespass America and God Forbid were here!

This point of the tour also marks the start of the final leg of the tour, as we will be pushing out west for the finish of the tour in Hollywood, CA! It's been a fantastic experience and I urge anyone out there who has the opportunity to come out to this tour to do so. I guarantee you won't be disappointed."

The Trespass America tour ends tomorrow, Aug. 28, in Hollywood, Calif. If you don't already have it (and you should), pick up God Forbid's Equilibrium album over at Amazon for only $5!