In recognition of the influence of Deep Purple, and of Machine Head in particular, some of rock music's biggest names have each contributed a version of their favorite track on the album. On September 25, Eagle Records releases the end result of the project, Re-Machined – A Tribute to Deep Purple's Machine Head.

Noisecreep recently caught up with former Deep Purple bassist/vocalist Glenn Hughes to chat about the album, the recent passing of Purple keysman Jon Lord and how the band isn't in the Rock and Roll Hall of Fame yet.

Glenn, what do you think Machine Head did for metal? Why is it so important?

When I look back, and I'm a child of that era, so when I think about the prototype of what heavy metal was back then, there was two huge bands that mattered. Sure, we can include Zeppelin too, but I know Jimmy and Robert don't consider them part of that, so for these purposes we'll leave them out of this. The two primary bands were Sabbath and Purple. They were the prototypes. But whereas Sabbath was heavy, Purple was more refined and melodic metal. It was different. And while they had a couple of good records before, Machine Head stands out because it blended so many interesting types of metal songs. The variety, the melodics – that's what I think makes it stand the test of time. And I remember the album really well because when I was asked to join the band they were still doing the Machine Head. It was a very long run.

Why did you want to be a part of this tribute album? Sometimes these types of projects don't really come out that great.

Well at first, I wasn't sure I wanted to be! I man, there are certain songs I wouldn't want to try and re-do but the more I thought about it, it seemed like a really fun idea. And my thought was, you have to honor the original melody of course but then take it off in some direction or what's really the point? Originally, my band, Black Country Communion, was going to do "Highway Star," but Joe Bonamassa was just too busy. So I went in with my dear friend Chad Smith from the Chili Peppers and Luis Maldonado on guitar and we did "Maybe I'm a Leo." I love how it turned out. We just cut it live, very sparse and real, with a bluesy vocal and hardly any overdubs. It's great. Sonically it's very organic; very Hendrix. I'm blessed to play with great players who live on that street; who know how to keep it simple and real.

And you also did "Highway Star" with Steve Vai and Chad.

The reason we did "Highway Star" was, I'd just gotten off a plane and heard the news about the death of Jon Lord. And I was just crushed. I knew Chickenfoot had already done a version of it for the album, but I wanted to do something for Jon. So we got Steve Vai for another very quick and live and wonderful recording session. And he was – well, he's Steve Vai, you know? He's the king of that genre. He just runs the controls of his spaceship. And he inspired me, as the engineer did, to really open up my pipes and go for it, which I did. For Jon. Overall, the album is a marvelous tribute. Lars Ulrich is the biggest Deep Purple fan there is. Maiden, Metallica –everyone tipping their hat like this is a wonderful thing.

Glenn, talk about the version of Deep Purple you were in from 1973-76.

Well when David Coverdale and I came in, we were two northern soul singers, just drenched in R&B singing. You know, Robert Plant and Paul Rodgers were the blues, we were soul. And so everything in Deep Purple changed with us joining. The songs became more rootsy and soulful. And having two vocalists was unique, sort of like Humble Pie and Three Dog Night. I think it was a great version of the band.

Many people put Deep Purple at the top of their list of bands that deserve to be in the Rock and Roll Hall of Fame. Your thoughts?

Look, we know the people in charge and we know how they think. It's become like a joke in a way. Gene Simmons will talk to me about it, and go on a rant and all, and he is exactly right. But I'm not gonna hold my breath. Deep Purple, KISS, Yes, and especially Rush – should obviously all be in. Maybe one day. But I don't think about it too much.

Who was your biggest musical influence growing up?

I'd say The Who. I was playing in a cover band, Finders Keepers, when Keith Moon befriended me. We opened for them around the time of Woodstock and it was amazing. Such bombastic showmanship, and sonically they were the greatest. I was just 17-years-old, had been playing bass only about six months – and that's what I wanted after seeing The Who – to be in a dangerous rock 'n' roll band that was not polite. And I went out and did it. 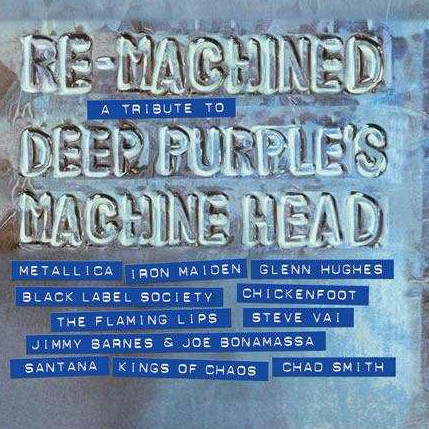 Re-Machined: A Tribute to Deep Purple's Machine Head will hit stores on Sept. 25 and is available for pre-order on Amazon. Black Country Communion's third studio album, Afterglow, will be released on Oct. 30.