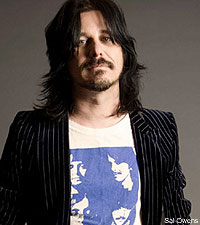 Former Guns N' Roses guitarist and solo artist Gilby Clarke was riding his motorcycle in the Valley in Los Angeles on Jan. 10 of this year, trying to get home from a gig when he was the victim of a hit run. The perpetrator has not been caught, yet Clarke endured two broken legs, a pair of surgeries, physical therapy, walking with a cane and a pause in his music career.

"It's going to be a good year of treatment before I work normally," Clarke told Noisecreep in this exclusive interview. But his positive attitude is crucial to his recovery. "I should get most of my functions back. It will just will take a while. I don't have a choice. I have accept it."

Can you recount what happened with your hit and run, which is the worst kind of health scare.

I was riding my 1965 Harley that I customized myself, riding back from a show, when some dumb ass made a left hand turn in front of me. It knocked me down, and when I woke up, my leg was busted and the other was twisted. He did a burn out and took off.

Has he ever been caught?

It is strange. They did not find him, but a friend found out who it was. No one got a license plate number and there were a number of different descriptions of the truck and not a lot of evidence. But somehow, one of my friends overheard a guy talking about how he hit a motorcycle and said that he took off since he had no insurance, no driver's license. I gave the info to a detective, but he didn't do anything. Since there were no eyewitnesses, there was nothing they could do. The LAPD won't do anything unless you die. It was extremely frustrating.

I can imagine, as this affected you on so many levels.

The medical bills are expensive and my bike is almost totaled. I may never be normal again.

Almost totaled, huh? So you salvaged the Harley?

If it wasn't a 1965 and rare, it would have been totaled. I wouldn't accept that, so I built a new frame, a new front end and put it back together. The bike will survive, and so did I.

How much of a hardship has it been for you? Has it stopped you from working?

I earn my living as a musician and producer and that is how I pay bills. It knocked me down for six months. I couldn't work till now, and I get around with a cane, so it has been tough. Musicians don't have a regular pay check; we have to go out and get it and with the change of the business, some of the things you can do to make money don't exist anymore. It has been a hard two years for me and for the rest of the country, but with this on top on of it? It was hard.

Did you write music at all during the recovery period?

I wasn't -- I just wasn't in that space. I was not feeling sorry for myself, but the creative juices weren't there. I was in so much pain. There was nothing to do. I have a guitar in my room that I play and I was logging up ideas in my head. This is a process for me. The record that comes from this [experience] isn't there yet and won't be til I am playing live and dealing with it.

Are you working again now?

I can work in my studio. I am currently mixing the Dwarves record and am halfway through, and I started doing live dates last week -- just my own solo dates. I am trying to get back on my feet and see how it is. It was only a 10-day run, but it was successful.

Has the accident changed how you perform, physically or mentally?

It was really hard. When I perform, I go into automatic mode, since I have been playing for so long. There is a certain way you move and operate guitar pedals on the floor and sing and you have to change all that. There are things I can't do. It is a different way of approaching a performance. A challenge is how I look at it; life would be boring without curve balls. You have to get over and have a better story to tell because of it. People have a way, when their back is against the wall, of performing or going down. Someone like me, who has been playing guitar for 30-something years, is not going to back down.

How do you really feel about the guy who mowed you down?

Time has gone by. He could apologize and hasn't done anything, so you know what? Karma will do its job. People make their choices. Someone does that and gets away with it? There are other people. He might kill the next person he does this to.

What can we expect from you in the near future?

We have six Texas shows booked this week and will gear up to work on the next album.