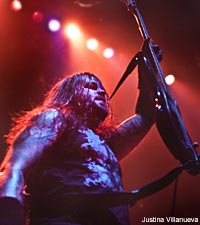 The three former Kill Your Idols members that make up Black Anvil are energetic fire-starters. Kick off a topic, and they'll spark into conversation. In the lapse of half minute, the band simultaneously revealed the basic elements behind their vision: aging and anger.

"A lot of punk and hardcore guys get older and move on to doing acoustic things. I'm not going to put it down, but we just want to keep getting [heavier]," guitarist/vocalist Gary Bennett told Noisecreep. "As I get older, I want to get [heavier] and [heavier]. I don't want to f---ing mellow out."

"Because as we get older, we get angrier," drummer Raeph Glicken keyed in.

"An acoustic guitar? I'd end up John Bellushi-ing the f---ing thing over someone's head. Like I'd destroy it." Bassist/vocalist Paul Delaney got angry at just the thought of the instrument. They each agree Black Anvil is their outlet for angst.

"Life doesn't get easier. But time insults the mind," Glicken, the main lyric writer, said. During any of their sets, you can often spot him slamming on his kit and screaming lyrics into the air.

The band agrees that it took all three of them to create Black Anvil and there is no room for replacements or fill-ins. Black Anvil was a natural evolution in the threesome's musicianship. After Kill Your Idols, Gary and Paul started Deathcycle, a crusty hardcore project. When they started writing riffs that were heavier, the music became Black Anvil, a blackened and thrashy metallic machine.

"A lot of people give us s--- because we were in a hardcore band," Delaney continued. "We've never not been into metal. And we're still into punk and hardcore." That is no stretch considering Delaney sported an Agnostic Front shirt the day they played Gramercy Theater. Pointing at his shirt, Delaney said to a friend that night, "This right here is the real deal."

One of the biggest inspirations for the band was the Celtic Frost reunion tour. "When I first got into music Celtic Frost was one of my favorite bands. [It was] a long time ago, before I was even in bands, when I was a very young kid. And I never got to see Celtic Frost. I always missed them and then they broke up." Bennett continued to express his passion for the Swiss metal band, "The Celtic Frost reunion was the most inspiring thing I've seen since I've been into music. They didn't just reunite and play the hits. They reunited and reinvented themselves. They reinvented their old material to the way it should sound today. They reinvented themselves as a band and put out an album that stands up to everything they put out in the past and what is going on now."

"Seeing the Celtic Frost reunion was the thing that really kicked it in my head and made me say, 'I wanna do something like that,'" Delaney added.

Black Anvil sometimes plays New York City shows during the week, like at the 'Precious Metal' showcase at Lit Lounge. Mostly, however, the band does shows on weekends because each member relies on jobs outside of the band to survive.

"We all have to have jobs. As serious as it can be, it's a full-time band but we just can't tour full-time," Delaney said.

"It's something that while we're at work we think about [the band] all day. We wait for these opportunities to do these things and it drives us to do it as hard as we can do it. Like tomorrow for instance, I'll be at work at 7:30 in the morning. I hope. I don't want to get there late. I'll be tired. But, I'll be f---ing high on all these shows. And how great it was. And how great Marduk was," Bennett said.