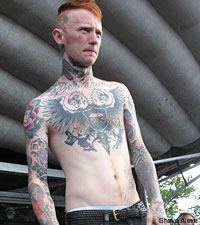 It's no surprise that the Vans Warped Tour isn't what it used to be. With bands on the bill that favor synth-heavy dance more appropriate for a rave, there is a severe lacking in the hardcore punk genre. There is, however, hope in the form of UK based quintet Gallows. With an intensely energetic show, politically fueled lyrics, and a knack for keeping the infamous Warped tradition of band feuds alive, Gallows are properly representing for hardcore purists everywhere.

Not a band to shy away from any sort of controversy, lead singer Frank Carter (at left) calls out "s---ty f---ing bands Jeffree Starr and BrokeNCYDE," and claims that the "only bands that matter on Warped Tour are Gallows, NOFX, Bad Religion, and Flogging Molly." Guitarist Stephen Carter echoes his brother's sentiments, commenting on how "there are a lot of terrible bands on tour. This is 'the punk rock festival,' and there's bands like Jeffree Starr and BrokeNCYDE. I don't know if they should be on Warped Tour really." 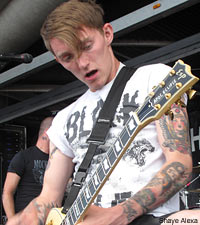 Guitarist Laurent whole heartedly agrees with his band mates. "I saw BrokeNCYDE and it made my blood boil. I try to avoid anything that's going to wind me up. It's really sad to think that there might be more kids watching BrokeNCYDE then, like, Bad Religion."

"S---ty" bands aside, Gallows have gained a much broader fan base in America since their first Warped run in 2007, however support for the band at home caught on some time ago, especially with regards to the British music media. "Radio 1 gives us a lot of love. They're really into the band. They really like what they're doing. Kerrang gives us a lot of love. They've been behind us since before we even signed to Warner Brothers. We had a cover with Kerrang before we did anything. They've been behind us from the beginning," says Carter. However, not every outlet has been as supportive. "The NME can go f--- themselves," Carter concludes.

On the heels of their album 'Grey Britain,' Gallows finish up Warped Tour in August, and then begin an intense touring schedule which includes October dates in the states with AFI, and a UK jaunt with Trash Talk and Sharks. Whether it's their critically acclaimed album, or opinionated banter that gets people to shows, there's no arguing that Gallows are making their mark on America's hardcore radar, and with the unbelievable performances that they deliver, they will be there for a very long time.