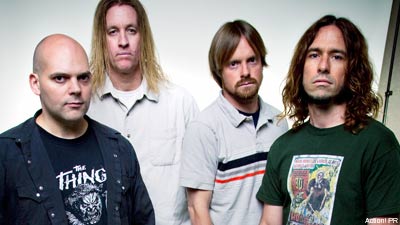 Fu Manchu guitarist Bob Balch has launched the educational and entertaining website, PlayThisRiff.com, which offers music lessons to fans by the very artists who perform the songs! "I started PlayThisRiff.com because I wanted to see a website that featured HD videos of actual touring musicians showing others how to play," Balch told Noisecreep. "I didn't want it to be some goofball showing me the wrong way to play a solo, but the actual artist showing me how to play a solo."

Those who become members of the site can make requests of songs they want to learn and Balch will go to the ends of the earth to make it happen! "We will work ourselves to death to fulfill them," Balch, who chatted with Noisecreep after a surfing break, said. "If there is a band they want to see, or a technique they want explained, we're on it!" Did you catch that, readers? If there is a riff you want to learn, or a technical part you want to know how to master, then head on over to the site and submit your request!

Balch also said, "I am looking forward to PlayThisRiff.com becoming gigantic in the future. Maybe we can lend a hand in ridding the world of crappy bands. We started with a few bands back in April 2009, and now -- almost nine months later -- we are proud to feature this roster of musicians." The roster of featured bands includes Fu Manchu (duh!), Articles of Faith, Clutch, Deicide, Every Time I Die, Exodus, Gwar, Obituary, Pelican, Pentagram, Queens of the Stone Age, the Red Chord, Trivium and 3 Inches of Blood, among many others -- and countless more to come.

Balch also admitted that he is learning from the musicians he films, saying, "I might have lifted an idea from the band Torche on the new Fu Manchu album. Not directly, but looking back, I now know where I got the idea from!"

Aspiring musicians, make sure to bookmark and constantly check PlayThisRiff.com.