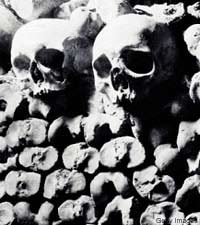 FADE TO BLACK: Iconoclastic French progressive black metallers Blut aus Nord have parted ways with longtime label Candlelight Records. The band's latest release, 'Memoria Vetusta II: Dialogue With the Stars,' was met with fervent critical acclaim (and is already one of my hands down favorite records of 2009!) and saw the band melding the experimental sensibilities of their recent output with the icy cold black metal and grim melodies of their earlier material.

THE CULT IS ALIVE: True Norwegian black metal punks Darkthrone have announced that their next album will be completed in September. In a recent interview with Faithcraftmobile, Darkthrone drummer and champion of old-school metal Fenriz slammed the modern underground scene, remarking that, "The biggest difference between 80s underground and these days is that everyone has an opinion now, and they can spread it like the weak virus it is. In 80s the underground was purely constructive. If someone had a negative opinion, they had to form a band and sing about it to get their opinion through. Capice?"