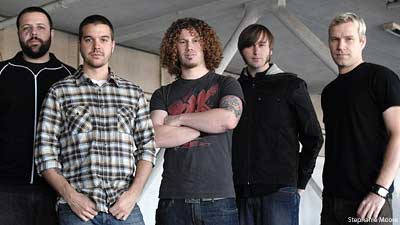 You might remember Chris Chasse from his days playing guitar with punk heroes Rise Against. Our readers who favor more of the traditional hardcore stuff will recognize his name from his time with Boston's Reach The Sky in the late 1990s. After two successful albums with Rise Against, Chasse left in early 2007. Although the band cited the rigors of touring as the main reason for his departure, the guitarist quickly came back with a new band called Last of the Believers. The new project got its fair share of attention but then just as swiftly as it rose, it seemed to disappear.

Showing off the unflinching tenacity that his DIY punk roots taught him, Chasse recently announced that he had a new band called Nations Afire and would be touring throughout the rest of 2009. In this Noisecreep exclusive interview, we caught up with the busy guitarist to talk about his new band and his days in Rise Against.

Chris, you played in Rise Against for a few years and left after 'The Sufferer & the Witness' album. How daunting was the work schedule and lifestyle of being in a band that popular?

Being in Rise Against was definitely busy, that's for sure. If we weren't touring or in the studio, there were always rehearsals, interviews etc. I liked it though because I simply enjoy being busy. I've learned that no matter how large the audience is for the band I play in, I still remain the same person I've always been. Just because I've sold a certain amount of records or played in front of a larger crowd than most, doesn't mean that I should suddenly develop some huge ego over it. I just love playing music. Whether it's in front of 10 or 10,000 people, I will always love performing and playing music. I cherish the time I spent in RA and the friends I made, and I'm excited to have that experience with Nations Afire now.

Do you picture yourself ever wanting to be on the road that much again?

I/we would love to be as full time as possible. None of the Nations members have normal 9-5 jobs. We either play music full time, or pick up odd jobs to pay the bills. Realistically, we'd like to be on the road over 200 days a year, all over the globe.

You started a band called Last of the Believers after you left Rise Against. What happened with that?

Last of the Believers was formed very quickly by some friends of mine and I. I spent a lot of time working on that band, the music, getting it out to people, and generally spreading the word. It was relatively well received by others/critics, but most of the members simply didn't want to be full time musicians. It breaks my heart a little that it fizzled out so quickly with only 40 shows or so under our belt, but I really am proud of the music that the band created in such a short time.

Nations Afire also features members of Ignite and Todd Hennig who played in Death By Stereo for a few records so your backgrounds are similar but was their a sonic blueprint you set out to follow when you started the band?

There was no set plan when the band started. Todd, Brett, Nik and I started playing together and we all simply combined our likes in the music realm. We are all fans of Bad Religion, Foo Fighters, Rise Against, Thrice, Alkaline Trio and so on. We've been writing non stop over the past year, and chose some of our favorites for the five song 'Uprising' CD. The newer music is even more developed yet raw sounding so we're really excited to get it on tape and share it with everyone as soon as possible. We've been playing five or more new songs at our shows along with the CD tracks.

Your singer, Steve Ludwig has such a huge voice! Where did you find him?

We honestly searched for a singer for at least six months, and simply couldn't find anyone. There were a few leads here and there, but nothing came out of any of them. Then one of our friends suggested Steve. He knew of Steve's other band that had recently broken up and said we should give him a try. Sure enough, we had Steve come over and try out some vocals over demo tracks we had recorded. After a couple weeks of work, we finally told him he was our guy. I've yet to hear anything negative about his voice from anyone, which is extremely rare, and we're excited to have him on board. Plus he stands out in a crowd as I learned in Europe recently. People spot him from a mile away and come right up to talk to him. It's great.

What is the game plan for the next 12 months? Will you record the album before you have a label set?

The next year for NA is going to be as busy as possible. We have plenty of new songs, yet we keep writing more. Tour dates for August and beyond are currently being worked on and finalized as well. I would personally love to have a full length out early next year, and hopefully get a spot on next year's Warped Tour. We're in the process of finding a label as we speak but at the same time we're in no rush. We've done everything ourselves thus far (show bookings, recording, CD distribution, press etc.) and we have no problem continuing to do so until the right label/offer comes along.