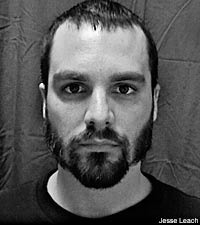 At this point, let's just face it: Killswitch Engage are huge. Need proof? This summer, on the Rockstar Mayhem Fest, the dudes had freaking pyro. Pyro, for crying out loud! And with a new album in stores and a whole lot of touring planned for the rest of this year, Killswitch are on something of a roll.

It's for this reason you haven't heard too much about Times of Grace, the side project of Killswitch mastermind Adam Dutkiewicz and former frontman Jesse Leach. The band, which has signed with a major label, has an album in the bag. But Killswitch Engage fans won't get to hear this long-awaited mini-reunion until at least 2010 -- and probably well into it.

"It's tough," Leach tells Noisecreep. "We have to handle the project with kid gloves and be sensitive to Killswitch. That's the main thing. That's the career band ... the band that's paying the bills. So, everything has been handled in such a way with the management, the label and the business side of it ... that's why the album's shelved for the time being."

While Leach is sure that it won't be soon, he isn't sure on much else. "It will most definitely be out next year, but it hasn't gotten mixed yet. Me and Adam are really excited about it. But, it's a matter of our schedules and keeping a respectful distance from Killswitch, their album and their touring, so it doesn't disturb it. That's all I can really say about it."

Really? You can't even give us a little hint regarding what the record will sound like? "It will definitely surprise people," Leach enthuses. "It's a little bit of what people want and expect, but it definitely pushes the envelope. There are different styles of songs, and it runs the gamut of genres in metal and I'm extremely proud of it."

Times of Grace came together in 2007, when back problems forced Dutkiewicz to sit out Killswitch's run on the Warped Tour. From the confines of his hospital bed, and later those of his own bedroom, Adam started killing his time writing music. With a guitar on his belly, Dutkiewicz started writing riffs, and before long, had an entire album's worth of material. So he demoed it using a drum machine and gave a copy to Leach before he left for tour with his former band, Seemless.

"I listened to it and it completely moved me," says Leach. "It was the most amazing piece of music I'd ever heard. I immediately started writing to it, and got most of the writing done on the road. When I got back from tour, we demoed it, and we decided, 'This is it ... this is the album of our careers.' We wanted to make the 'Abbey Road' of metal albums. We didn't want to hold back. We wanted to add layers and textures and vocals ... everything we could possibly put into this album. We just decided we were going to full-on make a masterpiece. And we did."

In a way, Leach, who was with Killswitch until soon after the release of the band's seminal LP 'Alive or Just Breathing,' feels as though he's destined to keep working with Dutkiewicz.

"I have to say, this is not the last album," he forecasts. "We're already talking about doing other stuff together. We've been talking for years about doing a dream pop album in the vein of early Radiohead. We're both into Brit pop like the Verve and those bands ... early Coldplay. So, we may do something like that ... but in our own style, because we're both metalheads.

"I'm way into ambience and texture, and we definitely flirted with it a lot on Times of Grace, but we could both take it to the next level. In a prefect world, I'd love to be the metal version of Radiohead. [Adam and I are] musical soulmates as it were, and this will not be the last thing people hear from us."