Noisecreep has partnered with Fit for a King, the newest Solid State buzz band, to premiere their brand new song,"Hollow King (Sound of the End)." The track will appear on their new album, Creation/Destruction, which will hit stores on March 12.

Musically, it's smarty and moshy, Meshuggah-like metal with lots of mathy guitar parts.

While the music is ferocious enough to rouse the dead from its long and permanent slumber, the underlying meaning is certainly powerful. It's lyrically and conceptually intricate and it's beyond thought-provoking, as it addresses a crisis of faith.

Listen to 'Hollow King (Sound of the End)'

'"Hollow King' is a very unique track for me, lyrically," said singer Ryan Kirby. "It's a story of a person that sees his friend slip into the Devil's grasp because of the 'God-Free' view he instilled upon him. The person then decides to go after and save his friend, which he does without faith that God can remedy the situation. During his mission to save his friend, he also falls into the Devil's clutches. Near the middle of the song, Satan is mocking his lack of faith. The friend in the story ends up actually being himself, hence the lyrics 'Staring face to face and eye to eye / With the man who abandoned everything.'"

But this track isn't a case of "alls well that ends well," where everything wraps up neatly. "This song doesn't have a happy ending, giving it a dark vibe," Kirby confessed.

So strap yourself in and join Fit for King on this faith-focus ride. However, we feel its important to mention that you don't have to subscribe to or immerse yourself in the message to appreciate the song. The lyrical meaning merely enhances a brutastic song. 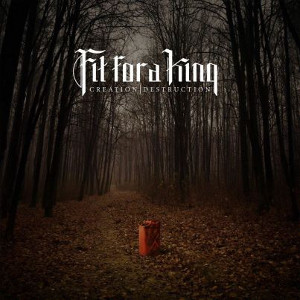 Creation/Destruction will arrive in stores on March 12 and can be pre-ordered at this link.

March 16- Grand Prairie, TX (SOUTH BY SO WHAT?! Music Festival) – QuikTrip Park w/ All That Remains, Escape the Fate, Chiodos, Confide and many more