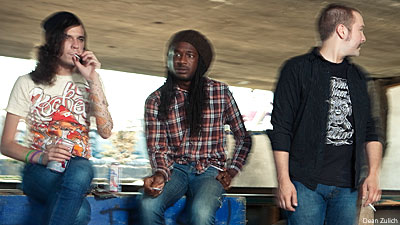 For the second time in as many months, a 'cred' band has taken a shot at Metro Station, the band fronted by Miley Cyrus' brother, here on Noisecreep.

When asked by Noisecreep about which cross section of fans the Fall of Troy will appeal to, vocalist/guitarist/keyboardist Thomas Erak said, without a shred of hesitation, "I hope kids can sack up and accept something that is not bulls--t, like Brokencyde or Metro Station, which is all crap rock 'n' roll. Our music is real rock 'n roll. This is real music made by real people playing real instruments."

Ouch! Erak certainly doesn't hide his feelings about what he dubs manufactured rock, and we applaud him for his efforts to keep music as pure and organic as possible. "They could be nice kids, but I am making a statement on what I believe rock 'n' roll is about," Erak said, further explaining, but not defending, his comments. "A lot of s--t out there right now is completely tearing down the ideals about what rock is. If you use auto-tuner or vocoder in rock 'n' roll, you should be shot in the head. Music is the only thing I feel that strongly about."

Erak doesn't stop there, though. He has more to say about what he considers bad music. "Even if a band is nice, I am still on a mission to start a revolution, but I am not going to do that by bringing those bands down one by one. My mission is to have all of them be forgotten. I am not having beef with anyone, but I want that genre to be completely forgotten, you know what I'm talking about? All that mall punk rock crap. I feel the same way about hip-hop right now. I like Lil' Wayne, but whole vocoder thing is out of hand. It's ridiculous. Why sound like that? It dumbs music down and the people who listen to it. That style takes away ability to be creative with their minds."

Fall of Troy's first step in inciting a revolution is their new album, 'In the Unlikely Event.'

The Fall of Troy Tour Dates
on TourTracker.com