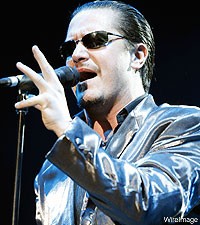 Mike Patton is a man of many voices. He is perhaps as well-known for his wails in Faith No More -- who will be playing Coachella on April 17 and the New York's Williamsburg Waterfront on July 5 -- as he is for projects like Mr. Bungle and Tomahawk, which are so delightfully far in left field that they hang out in the bleachers. You never know what this unpredictable vocal genius is going to do next.

On the new album and project dubbed 'Mondo Cane,' Patton reinterprets classic Italian oldies and pop songs; some are civil rights songs and one was originally sung by Connie Francis! He also performs with a 40-piece orchestra. Clearly, there's never a dull moment when you're Mike Patton, who spoke to Noisecreep about his love of Italian culture, Meshuggah and, of course, the Faith No More reunion -- all the while doing the dishes. Those are just a few of the many, many reasons we love this man.

'Mondo Cane' is all Italian songs. How did you become fluent in the Italian language?

I lived there for a number of years and got enamored with the music. It was none of the modern music, oddly enough. I found this radio station that played oldies, and it inspired me to think of a new way of interpreting them. The music made sense to me immediately, and I knew that some day I would do my interpretation of this kind of music.

It's funny, because 'Vanity Fair,' the Mr. Bungle song, sounds like doo-wop but still has the Mike Patton touch. For these Italian songs, you Mike Patton'ized them the same way.

Well, what do you expect? [Laughs] It is a delicate situation, sorry, I am doing the dishes here. It's really a delicate situation. I am talking about tunes I love and respect, so it's hard to attack them from an aggressive point of view. You have to be respectful. It is a little difficult when you do any kind of cover. You walk this tightrope where you want to make it yours, but to also make it respectful. This record is walking the tightrope.

If the original singers heard these songs, do you think they'd like them or would they think you cannibalized them?

I have no idea, but I've been in a few strange circumstances when I first played in Italy as an artist, when we played some shows in theaters and played a few shows [in an] outdoor piazza ... that was amazing. I lived in Italy and would go to those things. In whatever town you lived in, you'd go to the town square and listen, and we were one of those bands. It was bizarre for me to imagine walking up from my house and hearing this s---. It is bizarre, because there were old people in the crowd and some people who knew what was going on. It was an interesting cultural crossroads.

How did you choose which songs you wanted to cover?

I had a gigantic list of really great songs and I had to sort of wind them down to what I could sing, what I could translate, what I could pull off. Anyone can put together a list of favorite tunes, but the real trick is -- and the key is -- to come up with something you can pull off and interpret in your own way. Not all of my favorite tunes would I want to touch. If it's perfect already, why f--- it up?

How the hell was it working with a 40-piece orchestra?

It was fun. It was new. It was interesting. Orchestral musicians have a different approach than we do, and when I say 'we,' I mean musicians who don't know what they are doing. I let the conductor deal with the orchestra, and I dealt with the band. The band is 12-13 people, yes, but I know how to deal with a band. But there were some different moods that an orchestra has that I am not used to, having played in rock bands.

And the phrase 'Mondo Cane.' Did it come from the Italian shockumentary?

Honestly, it is also a saying in Italian, and it means the world is going to the dogs.

My dad speaks Italian, so he would have gotten that!

How do you say your last name? [Note: I say my last name and he repeats it with flair!] She-a-rett-o. Come on, you have to say it right. [Laughs]

What part of Italy did you live in?

I lived in Bologna. I go back quite often, and I still have lots of connections and lots of friends. It was a nice period in my life. I hope to go back. To me, that is the place you think of when you think where you want to die. That would be it.

Will you tour on 'Mondo Cane'?

I am working on it. It's difficult since it's not like normal projects, where I call five people and say, 'Meet me in Columbus, Ohio.' It is also expensive, so I am going to do my best to play shows in the States and not lose my shirt in the process. Think about it. It's a 15-piece band, plus 40-piece orchestra -- and it's not palatable to most people. It'll be the right situations and cities and the right time and right person to work with. I will play shows with this project. Where and when? I don't know.

Having done vocals on a Dillinger Escape Plan EP years ago, what are some metal bands you are into?

I am not good with current, but I still love Meshuggah. I have been on tour with Faith No More, and we played some festivals in Australia with Meshuggah. It was the first time I had seen them live, so oooph. I was very floored and impressed. It made me want to give up playing music, in the good way.

So, the Faith No More reunion show in New York ... that sold out in like two minutes!

Come on, it was not two minutes!

Ok, so like two hours. After Faith No More broke up, the band became bigger than it ever was and the mythos of the band took on a life of its own. My question is simple. Why now? And how do you feel doing it?

Well, 'Why now?' is a strange question that I can't answer with any sort of intelligence. I have no idea. There is some sort of thing in our culture that fetishizes things from the past, and we have gotten more attention now that we've reunited than we ever had before. That is automatically weird and tells you about people and our society ... what do they want to hear? They want to hear things that make them comfortable and remind them of certain times and places in their life, which is totally OK. Being as old as we are, we're a part of that. I can tell you this: Musically, we sort of got back together, played together and realized this music still works and is still good and still feels good. Whether or not it is going to translate into today is another question. But we feel confident enough to keep playing it. There you have it. I am not going to lie. There were also offers that were ridiculous.

Probably something you couldn't turn down?

You can always turn it down if it doesn't feel good. That is easy, but the point being there was interest and we still felt proud of the music, and we kinda cooked up a new batch or took old ingredients and threw them in a new pot, so it felt right and it was easy ...

Like Faith No More's cover of 'Easy'? Sorry, had to do it. What's the final thing you want to say about 'Mondo Cane'?

If you like orchestral music and have a heart in your f---ing chest, you will like this record.