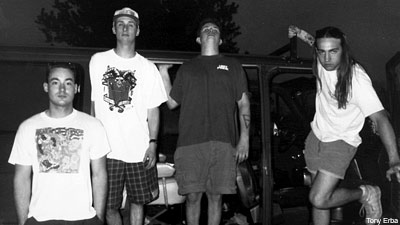 Cleveland's Face Value hooked up with BMX bandit Ryan Humphrey, who created the album art for a career-spanning, 31-track retrospective on the band's career, which began all the way back in 1988 before Face Value elected to disband in '93. "Frank Mauceri from Smog Veil hooked that up," vocalist Tony 'T.A.' Erba told Noisecreep. "And being an old BMXer myself, who used to race at Avon Lake, Stow, Burbank, around Northeast Ohio, I was thoroughly stoked. Beyond that, it was all Frank who masterminded that and I couldn't have been more agreeable."

While many readers may not have been around during Face Value's initial go-round and humble beginnings, the retrospective can give fans of hardcore a piece of the genre's Midwestern history and past to gouge on. "Face Value was a band that came out of the twilight of the '80s positive hardcore scene, at the tail end of the singalong/anthemic fast hardcore sound," Erba said. "We hit right as our particular subgenre of hardcore was changing towards a heavily metallic, tough-guy posturing oeuvre that was almost completely removed from just a faster, leaner version of punk that was the original inception of the term 'hardcore.'" Honestly, we couldn't have said it better ourselves; Erba's estimation and summation of the scene's sonic shift truly illustrates how omnipresent metalcore was born.

He continued, "I wasn't a fan of this trend and wanted to keep our music positive, fast, wild, fun, anthemic and loud. Also, while most of our peers were really going metal, we were more like hardcore meets classic rock, insomuch as we were all influenced by stuff like Thin Lizzy, Kiss, MC5, James Gang. So those influences were always subtly there, and the end result was that Face Value was band that had a rockin' hardcore sound that I really don't think any other band was doing at all during that time. At that time, admitting to a rock 'n' roll influence in your musical makeup was anathema."

Nowadays, a rock influence is much more accepted, which also proves the point that Face Value were certainly ahead of their time. "Now you see it much more prevalently, especially in great bands like Annihilation Time," Erba said. "Who proudly respect the rock and are essentially a band that plays boogie rock at hardcore speeds with a DIY attitude. I can't take credit for this, of course, but if you listen to a Face Value record and a record of another top hardcore band of our era, you'd have to say we were pretty damned unique."

Face Value were definitely not your standard-issue hardcore band. They hailed from the mean streets of Cleveland, known for its blue collar values and bitter, frosty winters. When asked if those cold, hard facts bled into the band's music at the time, Erba intoned, "What do you think? I'd say Cleveland is a town in decline, but quite frankly, it's on the 'do not resuscitate' list. Yeah, sure, of course, it's a rough town full of shattered dreams and a long-suffering inferiority complex. I'm quite sure that's reflected in our music, certainly in my lyrics."

The Face Value retrospective is out now via Smog Veil Records.