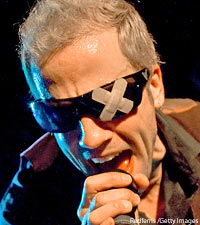 "I wouldn't say we were their first pick or they were our first pick – tours are tough," Extreme front man Gary Cherone says to Noisecreep about the band's upcoming trek with 80s rockers RATT. While the touring combo of RATT and Extreme might seem a little odd, Cherone and bassist Pat Badger swear it all makes sense.

"Nuno (Bettencourt) has been friends with Warren DiMartini for years," explains Badger. "As far as guitar and music...our styles may be different musically, but we are both certainly guitar driven bands. One from the east coast, the other from the west coast."

Cherone agrees and he's excited. "It should be good, I think the fan base is compatible. We know a couple of the guys. We've played with odder combinations: ZZ Top/Extreme, Bryan Adams/Extreme, this one will be more like family."

Extreme is touring behind last summer's 'Saudades de Rock,' starting in July and running through the end of August. The band will then get back to the studio to make a new record. "We're gonna get serious [about writing] at the end of the year," explains Cherone. "But we're always writing and coming up with ideas."

The RATT/Extreme tour kicks off July 12 in Amarillo, Texas.