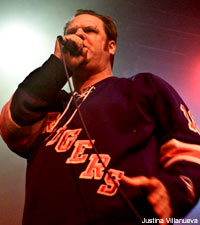 Just before Exodus were to take the Nokia Theatre stage, metal photographer and writer Ken Pierce warned me that it just might get very "violent." Apparently the last time the old school thrashers visited New York City there was an overload of crowd surfing.

So there I stood, waiting for the barricade to be ripped into pieces as frontman Rob Dukes grabbed the mic. Instead, however, my eardrums were violated. The entire Times Square venue rumbled when they started playing. Exodus' set was the loudest thing I've heard since seeing Dying Fetus at Starland Ballroom this summer.

"F--- Osama Bin Laden!" Dukes said after relaying how happy he was to be home. Unlike the rest of the band -- including original members Gary Holt and Tom Hunting -- who wore all black, he sported a bright blue and red New York Rangers jersey, proving his hometown pride. It was kind of an odd feeling, considering the band has always had a Bay Area history to it.

At some point, Dukes also shared his disappointment with the crowd. "I'm not trying to talk s---, but last night we were in Philly and they were way crazier than you motherf---ers. This guy up here isn't even sweating!"

Nonetheless, Exodus remain a punishing force in the metal world. You can check out their latest release, a live DVD and CD package from Wacken Festival titled 'Shovel Headed Tour Machine.' You can also look forward to their next album, which will be released April 23 via Nuclear Blast Records. It is called 'Exhibit B: The Human Condition'.