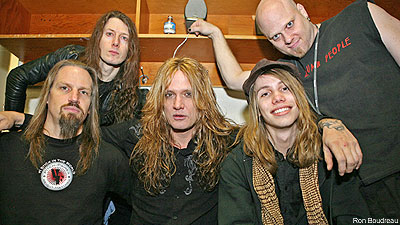 Sebastian Bach has spent the last few weeks rocking out in hot, glorious South America, supporting Guns N' Roses, including multiple shows in Brazil and one in Chile, which just suffered a devastating earthquake. But it wasn't so long ago that he was tackling the bitter cold in his homeland, Canada. Again with GN'R, Baz, as he has long been nicknamed, hit some cities that -- believe it or not -- he had never played back in the days of Skid Row or as a solo artist. Yes, the guy had played Russia but never London, Hamilton and Moncton.

With his longtime friend and photographer Ron Boudreau, Noisecreep road-tripped from Toronto to two of his shows in late January, an hour away to Hamilton and two hours to London. Baz's mother, aunt, sister and numerous brothers and friends came out to Hamilton, while the London concert was really low-key. There were no wild rock antics going on in the dressing room like there might've been 20 years ago -- and Axl, Baz's good friend, was no where in sight -- just a bunch of nice guys who let us watch the Guns show from the side of the stage..

Security was tight for Guns, and an escort was necessary even with passes. The live photo shoot didn't happen in Hamilton because of over-zealous security, but Boudreau managed to get cool band and family photos backstage. The next day in London, however, went off without a hitch. Baz and his tour manager ensured Boudreau got full access to shoot the set, and the singer gave Noisecreep a short interview on his Provost XL II tour bus for a gallery piece, before a bigger interview in the dining area of John Labatt Arena, where he dined on a healthy meal of grilled chicken and veggies, chatting openly about a range of personal subjects. 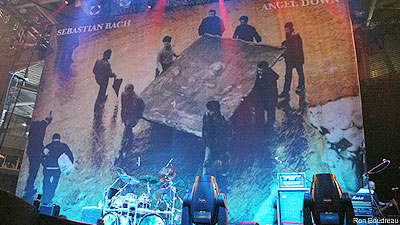 THE BACKDROP: It's the cover of Bach's 2007 'Angel Down' album, a painting entitled 'David Watching' by his late father, David Bierk, a famous visual artist who was even the subject of a 'Law & Order' episode. Bierk also did Skid Row's 1991 'Slave to the Grind' cover. "We had a backdrop of that made, and those goofballs from Skid Row have it somewhere in storage," assumes Baz.

In the dressing room, after his set at Hamilton's Copps Coliseum and surrounded by family, he yells excitedly, "How about that backdrop?! I'm like, 'You know what, dad? Is this big enough for you to see? Is this big enough for you, with the lights and the concert, the fans screaming for it? Every night!'" A few minutes later, he adds, "I just really wanted you guys to see the backdrop. When I first saw it, I bawled my eyes out."

Bierk was American-born but later became a Canadian citizen, settling in the small city of Peterborough, Ontario, where Baz grew up. "He was just a total do-it-yourself punk rock painter," Baz recalls proudly. "He just painted every single day of his life and it probably killed him -- [because of] all the paint and the acrylics. He used to come home every day and his skin would be just paint."

Bierk painted 'David Watching' in 1990 of the Statue of David, looking down on the city of Florence, explains Baz. "In the '60s, there was a flood and they had to move all the paintings out of the chapels so they wouldn't get wrecked. My dad thought that was a really cool image. My dad's name was David and the painting was of the Statue of David. When he died, I couldn't look at it because it was called 'David Watching.' But it just looked like a killer album cover."

His father now has the best seat in the house, 'David Watching Sebastian,' from the back of the stage, always with him. "This is the art of my life, and to go across Canada and fly that backdrop and have all the fans scream and yell for it is absolutely mind-blowing for our family," says Baz. 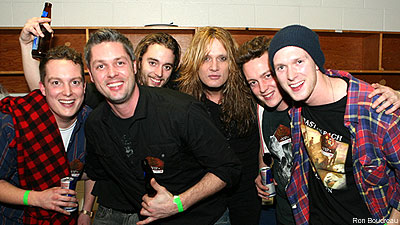 THE BROTHERS: Baz has two sisters, Heather and Lisa; and five brothers, Charlie, Zac, Jeff, Alex and Nick. Everyone but Lisa (who lives in California) was at the Hamilton concert, as well as his mother and aunt. 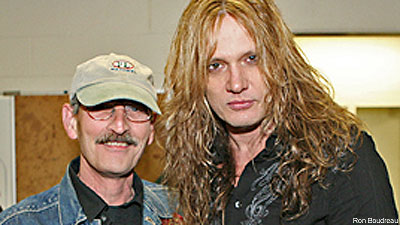 "I want him to autograph it," says Anderson, now part of the artist collective at Cram Art, Canada's smallest print studio and art gallery, based in St. Catharines, Ontario. "Everything's crammed in. We guarantee a full house."

"He was one of the artists that, with my dad, started Artspace. He was on the cover of Arts magazine in Canada in 1977 with my dad. You can see it on my Web site. I love that shot. You guys look cool as hell. That was heavy, man." 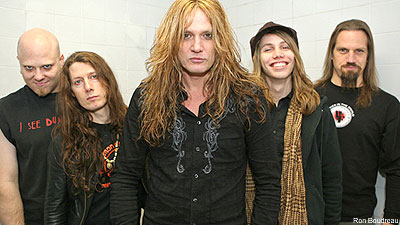 THE BAND: "I've been playing with them for at least five years. Bobby Jarzombek is the best drummer in the world. He played on all of [Rob] Halford's stuff. He was also in the band Riot; Johnny Chromatic is a very amazing guitar player and also a great singer. The biggest plus he has in my band, he helps me sing, big time. Our harmonies, our voices, sound good together in 'I Remember You' and all that. We have similar tones.

"And there's a lot of singing in Skid Row music. There's a lot of background harmonies. Rob DeLuca is from the band Spread Eagle who had a great album. He plays bass. And Nick Sterling, he's a rock star, what can I say? He's great. If I could have Nick Sterling with [Metal Mike Chlasciak's] feet, I'd f---in' have a real killer band [laughs hysterically]." 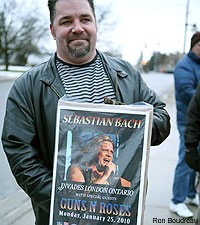 THE FANS: In the freezing cold, a few die-hards are standing outside Bach's tour bus at the John Labatt Centre in London. John Hockley, 38, has spent a couple of hours creating a poster that flips the headliner and support act: "Sebastian Bach invades London Ontario with special guest Guns N' Roses, Monday, Jan. 25, 2010."

"I've been a Skid Row fan since they came out in the '80s," Hockley explains. "I like his solo stuff, but I go back to the beginning. He's a good frontman. He's awesome. I've seen him a few times. I'm a graphic designer, so I made this [poster]. It reads that Sebastian's the headliner, which he should be."

Baz comes outside, on his way to dinner inside the venue, and signs some memorabilia. "Sometimes you gotta wonder if they're just selling it on eBay," he says later. "I don't think they were -- I think they were real fans -- but you get the guys with the pick guards, like a hundred of them, with the blue pen. 'Do you think I'm new?' [laughs] There's a lot of those kind of people that wreck it."

MEALS AND RIDER, POST CELEBRITY FIT CLUB: It's around 5:30 PM and Baz is still on the tour bus, but is adamant about going inside John Labatt Centre for dinner time. At 6:15 PM, he'll shower and at 7 PM do 35 minutes of Italian opera scales. He sticks to a precise schedule when he's on tour.

"If I don't eat now, I'm gonna be burping on stage the whole time, which might not be a concern to other people, but [sings] 'I remember burp,'" he laughs.

He can currently be seen on 'Celebrity Fit Club: Boot Camp,' living in an army barracks with Bobby Brown, Kevin Federline and others, but the reality TV show has long been over and he has continued to eat healthily -- and it's paying off. He looks great and feels even better, he says.

"Turkey makes me tired and I don't eat pork, so they gotta make me some special chicken," Baz says, placing the order and taking a seat with a plate full of broccoli and carrots. 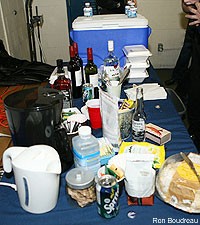 The rider in his dressing room has also changed from decadent to healthy. "It's boring, but, yeah, all I got in there is tons of water and coffee. My pre-show meals are usually chicken or fish for energy, vegetables, and then after the show now it's ground turkey or chicken burgers or turkey bacon.

"This f---in' TV show man -- I mean, I'm a whiney little b---- about it," he laughs. "When you see me on TV, you're gonna go, 'Oh my god, it's the worst.' It's the worst of Sebastian Bach. It's horrible, but it's great. Let me tell you, there is no inspiration in the world for losing weight more than getting weighed in on national television."

But Bach, when he's on the road, always looks his lean and lanky self. That's because, he tells Noisecreep, he lets himself go when he's not on tour.

"I just get lazy and I don't care. The performance is my inspiration, but my wife [Maria] has an absolute perfect body. She totally knows about nutrition and goes to the gym. I would just say to myself, 'Well, I'm off the road, so it's OK if I get a little bigger.' And I'd go, 'Why are you going to the gym again? Why don't you sit around, watch DVDs?' And she's like, 'Whatever dude, have a nice day.' And I'd be jealous of her because she'll go every single day. So now I go with her every single day. So that's part of my routine instead of just sitting around."

Another lasting effect of 'Celebrity Fit Club' is Baz keeping a food journal. "I log everything," he says. "I really changed the way I eat. The way I was raised, I'd wake up and I'd have peanut butter and toast and pancakes and bacon. My dad was a big eater. I was raised to clean my plate, eat everything; there's starving kids in Ethiopia. I just changed the way I eat."

He does miss Harvey's cheeseburgers and fries in Canada, but his last pig-out at Christmas that concluded with apple pie and cheesecake sent him right to sleep. "I didn't feel good. I didn't enjoy it.

"I just like rock 'n' roll," he concludes. "When I was a kid, David Lee Roth used to be into Kung fu, and I look up to rock stars that take care of themselves more than ones that don't.

"I'm blessed with this tall f---in' body, and if I take care of it, then I can be the Sebastian that people want to see. In all the pictures, all the YouTube stuff, I'm like, 'Oh cool.' Before I was like, 'I'm gonna get that taken down.' Now I'm like, 'Put it up.' They're all good."

After he does his vocal warm ups till 7:45 PM, Baz says, "I put on my leathers," slowing enunciating the word so it even sounds slithery. "The leathers kind of warm up to my body," he laughs. "It sounds so gay, but they do. Now they're sliding off me. I spend half the show lifting them up. It's getting stupid now, but that's a good problem to have."