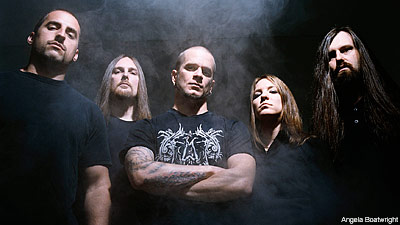 Talk about repaying a favor! With vocalist Phil Labonte fresh off a tour where he stepped up to the plate for his friends and filled in for Killswitch Engage's Howard Jones for over a month in a stint that was dubbed 'Philswitch Engage,' Labonte's full-time band, All That Remains, have returned to the studio to work on their fifth album. KsE guitarist Adam Dutkiewicz is producing the album, which follows up 2008's 'Overcome,' ATR's breakthrough biggest seller. The band is currently in pre-production at Zing Studios in Westfield, Mass. on the currently untitled album.

They're obviously stoked about getting back to work with their longtime buddy, who also produced 2006's 'The Fall of Ideals' and 2004's 'This Darkened Heart' -- albums which established ATR as their own formidable metal beast. We think it's rad to see the two friends partner up again, especially after Phil did KsE a 'phavor.'

"So I'm home from six weeks filling in on vocals for Killswitch, get to our practice space, and there's Adam D. again," Labonte told Noisecreep with a laugh. "Fugg!!! We're in 'time to make the donuts' mode, and the donuts are metal tunes! We're pumped to be working with Adam again. Nothin' like making music in the spring with good friends in Massachusetts."

"Like I haven't had my 'phil' of Phil from ATR, as he was 'philling' in on the last KsE tour," Adam D. told Noisecreep. "When they asked me to do the new record, I gladly accepted. Although their practice space reeks of stale beer, Burger King farts and 'Chicopee tears,' I've heard some of their new stuff and it sounds like it's gonna be pretty sweet! Expect blazing leads, Greek chugs, some female bottom, a good amount of eastern Mass kicks and big vocals from a little man. Har har har!"

The album is slated for a fall release to be supported by a headlining tour.

Filed Under: All That Remains, AllThatRemains, Killswitch Engage, KillswitchEngage
Categories: Exclusive, Interviews
Comments
Leave A Comment
Back To Top