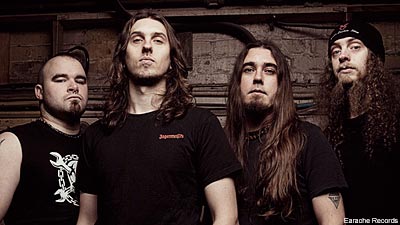 One of the coolest young bands to emerge from the new wave of thrash metal is Huddersfield, England's Evile, whose 20007 debut, 'Enter the Grave,' was a scorching blend of Slayer speed and Metallica-style riffs. With their 2009 follow-up, 'Infected Nations,' Evile strived to bust outside the box by creating more original songs without abandoning their core sound.

Tragically, less than a month after the release of the record, bassist Mike Alexander died from a pulmonary embolism while the band was on tour in Lulea, Sweden on Oct. 5. After considering a break up, the remaining band members -- frontman Matt Drake, guitarist Ol Drake and drummer Ben Carter -- decided Alexander would have wanted them to continue. So in late November, they auditioned new bassists and eventually found former Rise to Addiction member Joel Graham.

So on with the show they did go, preparing for a world tour to support of 'Infected Nations.' Currently the band is on tour in Europe, but Evile will hit the road with Voivod, Kreator, Nachtmystium and Lazarus AD on March 3 in West Springfield, Va. Then on April 1, they'll head out on the Killfest 2010 tour alongside Overkill, Vader, God Dethroned, Warbringer and Woe of Tyrants.

And needless to say, that much road time translates to plenty of interaction with the iPod. The only thing that took us by surprise on Drake's MP3 player was Sheryl Crow's 'Love Is a Good Thing.' But hey, snarling metalheads are entitled to their sensitive moments, too.

"I guess I should try and defend Sheryl Crow," Drake told Noisecreep. "Her self titled album is awesome. I used to babysit for my next door neighbor and she was a smoker, so when she left for the night I would shove a video on for the kids. They loved 'From Dusk 'Til Dawn' and 'Robocop.' They were seven and ten years old so I figured, 'Might as well get them watching good films early on.' Anyway, I used to still some of their mom's cigs from her stash, and this Sheryl Crow CD was always laying around, so I gave it a spin one night while stealing some cigs and discovered it was a really good album.

As for the rest of his list, Drake laments that iPod faves by Exodus, Nevermore and Slayer didn't surface, but he admits that tracks that popped up are a pretty accurate -- and in fact kind -- representation of his listening habits.

"It could have been a lot worse," Drake admitted, "I have been spared having my most guilty pleasures unearthed. But as a price to pay for that, the stuff that might give me a chance of convincing people I'm metal just hasn't come out."

While there's a scarcity of extreme metal on Drake's iPod, there's plenty of hard rock. like Guns N' Roses' 'In the Garden' and Aersosmith's 'Voodoo/Voodoo Medicine.'

"I saw Aerosomith at Wembley Arena in 1999 with Black Crowes supporting, which is actually how I discovered the Black Crowes. And I could swear Jimmy Page was sat a few rows in front of me," Drake said. "On the coach, on the five-hour trip back home from Wembley, I had to piss really desperately, but there was no toilet. The bloody driver wouldn't stop and no one would give me a bottle, so I had to hold it for five hours. I'm not mad enough to just let it flow anywhere. Whenever I hear Aerosmith now, I'm torn down the middle -- half listening joy, half exploding bladder doom flashbacks."

Mostly, Drake's iPod reveals his love of '60s and '70s rock, from the harmony-laden strains of the Beatles to the gritty swamp tones of Creedence Clearwater Revival. "Nothing does it for me like good old rock," Drake said. "Over the past few years I've listened to so much stuff from the '60s, '70's and '80s like the Beatles, Creedence, King Crimson and Gentle Giant, that I've not had time to check out new metal releases. But f--- it, there's nothing like the old stuff, and too much metal nowadays has crappy grunting."

While Drake generally doesn't listen to much rap, he does like Cypress Hill and is glad they made it onto his list. "I have no idea why I like them, actually," he said. "I think it's B-Real's voice -- that sharp mocking tone he used to have in his voice on the old studio albums. I could listen to it constantly. You don't hear anything like that these days."

Matt Drake, your iPod is showing:

The Beatles -- 'Do You Want to Know A Secret'

The Beatles -- 'Things We Said Today'

'Team America' Soundtrack -- 'Putting a Jihad on You'

Crosby Stills and Nash -- 'Find the Cost of Freedom'

Opeth -- 'Patterns In The Ivy'

Tito and Tarantula -- 'Back to the House'

Faith No More -- 'The Morning After'