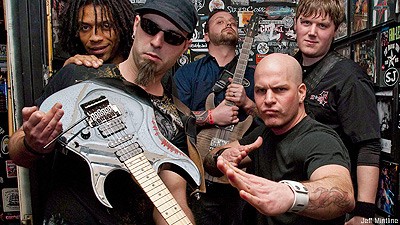 Back in 2008, Evans Blue found themselves without a singer -- creative and business differences were cited as the culprit for Kevin Matisyn being ousted from the melodic hard rock outfit. But after a long search, the Canadian band tapped Dan Chandler to be the new voice.

'Erase My Scars' comes off of the band's forthcoming self-titled third album, and it shows off a new darkness for the band, though the power of the song still grips on to the hopeful themes they've become known for since their 2005 debut. A video for 'Erase My Scars' is expected soon.

Listen to 'Erase My Scars'