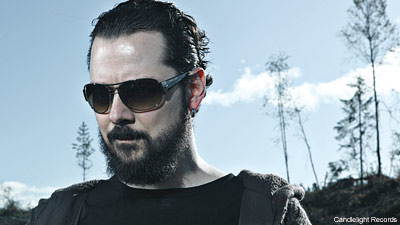 When ex-Emperor frontman Ihsahn determined that 'After,' the final volume of his 'A' trilogy, should sound bleak, barren and lifeless, he started thinking about what instruments -- aside from the usual guitar, bass, keyboards, drums and vocals -- would best convey his artistic vision. As a fan of avant-garde jazz saxophonists like Ornette Coleman and John Zorn, Ihsahn felt some improvisational sax would be just the thing to make his desolate soundscapes seem even more deserted.

"On the previous two records, I had a guest vocalist, and this time I wanted a form of instrumentalist that would contribute to the feel I was going for, and that's why I ended up using saxophone -- to keep it less personal and more open," Ihsahn told Noisecreep. "I wanted to make the music less confrontational and more epic, but still quite intense."

Since none of his friends played saxophone to his specifications, Ihsahn called up Norwegian nu jazz pioneer Bugge Wesseltoft, who Ihsahn befriended years ago at a French airport.

"Our meeting was just a coincidence, "Ihsahn said. "I was doing press in France, and he was doing a show. I saw him a couple times after that, and when I knew I wanted someone to play saxophone on my album, I called him because I figured he would know good improvisers."

Wesseltoft gave Ihsahn three names, the latter of which, Jorgen Munkeby, he suggested most strongly. "I didn't know who he was, and it was only after I talked to him that I realized he had also been working with some other metal people as well," Ihsahn said. "He's in the Shining, of course, and he also played in Jaga Jazzist, which has been a big favorite of ours. So he was the perfect guy, and working with him was fantastic."

In addition to augmenting 'After' with saxophone, Ihsahn achieved a deeper, more dissonant guitar tone by using an eight-string guitar. The process proved challenging, but yielded abundant rewards.

"I have used a seven-string guitar since I wrote Emperor's 'Prometheus: The Discipline of Fire and Demise' [in 2001]," Ihsahn said. "The transition from [six strings] to seven strings is not that big, but the eight-string has a longer scale and the lowest string is even a bass string. So it's a different type of instrument to approach -- somewhat difficult, but very inspirational."

Not only did Ihsahn have to learn how to manipulate another string, he needed to revise his whole approach to the instrument. "You can't do regular power chords on the eight-string guitar," Ihsahn said. "You have to think differently. But that's cool because it helped me to stay away from old patterns and made me work in a new way with new chords structures that were more inspiring."