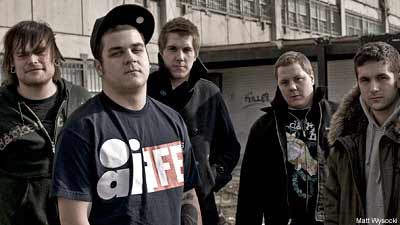 "We're surrounded by our friends all day because we have hung out and toured with all the bands on the tour prior to this one. It's a fun day everyday," Emmure guitarist Jesse Ketive told Noisecreep about the band's time on the Thrash and Burn Tour.

Fellow guitarist Mike Mulholland attributes the tour's 'fun factor' to "the abundance of awesome dudes on the tour and the hangouts that go down. We started the tour out with a bunch of friends on board right off the bat, but now we're halfway through and everyone's face is familiar and everyone kicks it daily." Clearly, road-forged bonds have developed between the bands on the uber-extreme tour, which also featured DevilDriver, Despised Icon, Periphery, Oceano and Thy Will Be Done.

As for why such a youthful audience is gravitating towards Emmure, Mulholland said, "I think our music speaks to a younger audience on a couple of different levels. Lyrically, it's pissed. Frank [Palmeri] taps into a dark place in a lot of our songs and I think younger people can relate to that on a personal level because growing up sucks and we all need a release. Kids lose their minds at our shows because there's so much energy, both on stage and in the crowd, that each one feeds off of the other and it's an intense, explosive experience."