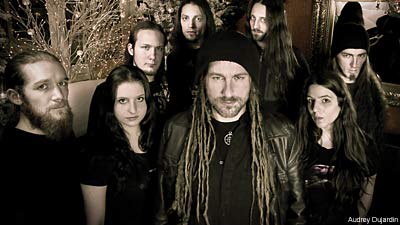 Banks and neutrality -- that's what Switzerland is known for, not its burgeoning metal scene. According to Swiss pagan metal band Eluveitie, the scene is spread all over Switzerland, which isn't a large country. But the scene is expansive and all over.

"I think the Swiss metal scene is a bit strange, but actually, there is a really big metal scene here," vocalist/mandolin player Chrigel told Noisecreep. "It is huge, actually. There are a lot of bands, and there are many good and talented bands, but there are virtually no bands in Switzerland who make it across the border. I don't know why that is. It is, in a weird way, self-concerned and contained, and I don't get it or care, since we almost never play in Switzerland. Most Swiss bands, for years, they exist and play shows but play within their own cities and the same clubs, same people attending the concerts. It's strange. I don't get it."

So while their brethren may stay comfortable within the confines and geographical parameters of Switzerland, Eluveitie will stay on the road, hitting America later this year to support their new album, 'Everything Remains as It Never Was.'

"We love to be on tour anyway, no matter which continent. It is cool to be on tour and be together with our fans and play for them," Chrigel said. The band likes to tour America, even if the food leaves something to be desired, simply because of the nature of eating junk whilst on the road.

"The food, we usually don't like, to be honest," Chrigel said. "It gives us a hard time. Don't get me wrong, I am not saying you won't get decent things to eat in America. But we are on tour, we are driving for 10 hours and then arrive at the venue and do sound check, play our show, get drunk, go back on the bus. It's hard to find good, organic food and we usually just eat hamburgers and pizza stuff like that."

Filed Under: Eluveitie
Categories: Interviews, Tours
Comments
Leave A Comment
Back To Top