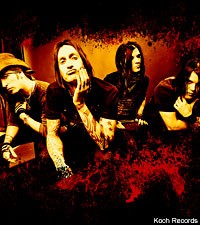 Dope fans may be shocked to notice the change in vocalist Edsel Dope. The singer lobbed off his signature dreads after the band's last record, 'American Apathy,' which was about three years ago.

"A lot of people who haven't seen on us on tour might be like, 'Wow!'" Edsel told Noisecreep. He chopped off his dreads because he had enough, saying, "After 10 years of looking at the same guy in the mirror, it got old to me. This may sound stupid, but it's hair! Who cares? It just became a parody of itself." Edsel finally parted ways with his dreads and rather than miss them, he felt freed, even though he took good care of his locks and never "looked like I had a cat sleeping on my head!" While facial piercings, tattoos and dreadlocks are visible signifiers of metal and subversively alternative culture, such accoutrements often had Dope pegged as a baggy jeans wearing, nu metal band.

Edsel also told Noisecreep, "This band has been misinterpreted by our image in a lot of ways. I had dreads but I am a skinny rock 'n roll dude. I was never a big zipper pants wearing guy or a quirky character, but we got painted like that because people looked like us and did it in a more flamboyant way. I think that hurt our credibility a bit."

"It felt good to not be stared at like I was weird by little kids in the store," he laughs about how he felt after being shorn of all that extra hair. "Tattoos don't bother anyone anymore. They have become normal so you wouldn't think dreads would not be looked at as abnormal, either. I am happy to be done with something that made me feel I was in a box."

Filed Under: Dope
Categories: News
Comments
Leave A Comment
Back To Top