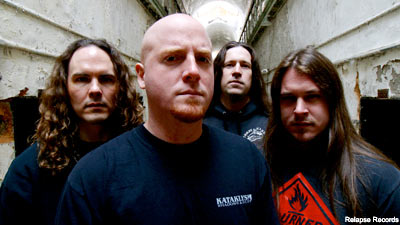 When you've only got enough time to play a five or six song set, you've got to try and mix things up a bit for your fans. American death metallers Dying Fetus have been doing just that on this year's 'Summer Slaughter tour,' which runs through July 20 in New York with Necrophagist, Suffocation, Origin and more. Bassist Sean Beasley says the band prepped six different sets for the trek, and that they've been revolving those since the tour launched earlier this month.

"We're playing a different set every night, basically, so that we can stay practiced up for our tours this fall," the bassist told Noisecreep. Between now and next April, Dying Fetus plan to spend their days traveling from show to show - all in support of their new album, 'Descend Into Depravity,' which hits stores September 15. You see, in August, they'll head out with Hatebreed, then head over to Europe with Cannibal Corpse, only to return to the states in November for a headlining run. They've also got some shows lined up in Russia, and will embark on another European headlining tour next spring.

So far, Beasley says the crowds for Summer Slaughter have been massive. Considering this year's summer is the first Ozzfest-free one in a while, he feels that perhaps it's that audience that's coming out to see the tour. "I could definitely see that happening, but who knows?," he admits. "I think people who want the heavy stuff are coming out, in general, because the bill is solid."

Dying Fetus will be playing some of the new stuff this summer. They've got two songs they're road-testing, called "Your Treachery Will Die With You" and "Shepherd's Commandment," and according to Beasley, the response from the crowd has been reassuring for the veteran act.

"It's weird to think of us as a veteran band in the death metal scene, very weird," Beasley admits. "But then, you get out here, and you realize how old everyone is compared to us. You've got other bands, like Obituary, and we went out with them in Brazil, and we didn't feel that old anymore. On Summer Slaughter, it's a little different. There's the Suffocation guys who are either our age, or older than us, and that's about it."

When asked why metalheads who haven't heard much from Dying Fetus should check out 'Descend Into Depravity,' Beasley's response was immediate, and honest.