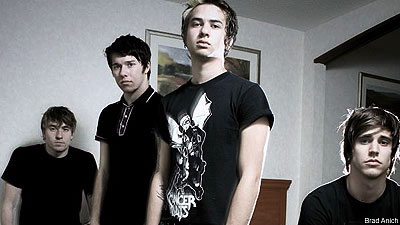 Drive A might be a young band, but their work ethic is steeped in the old school idea that a loyal fanbase is built on the road, and not on MySpace. The road warriors started out on the infamous clubs that line Hollywood, Calif.'s Sunset Boulevard. Their snappy cocktail of punk and sleazy rock brings to mind groups like D-Generation and Buckcherry, and their constant touring has found them on treks with the likes of the Used and Atreyu.

Drive A are currently opening for HIM, and Noisecreep just caught the Los Angeles date of the tour. Both acts were in fighting shape, but it was Drive A that played like their lives depended on it. Vocalist-guitarist Bruno Mascolo stalked the stage with the confidence and swagger usually reserved for the headlining act. While their 'Loss of Desire' album impresses, it's their live show where they truly look like stars. Their energy and rebellious spirit engages you, and their hooky songwriting gets drilled into your head from the start.

Noisecreep spoke with Mascolo about Drive A's frenzied touring schedule, punk rock and the struggle to win over some of HIM's older fans.

The thing that stuck out to me the most about 'Loss of Desire' is that despite your age, the band has a definite classic punk feel deep in its DNA. How did you first discover the music of that era?

I would always see bands, and people in the streets, wearing Sex Pistols and the Clash T-shirts. That got me curious. There was something about the way those shirts looked that just looked cool to me. From there I started checking out the bands from that time, and I fell in love with it.

Yeah, it totally did. There's something about those bands that feels dangerous. That's what I hate about the current music scene. That sense of danger and rebellion is lost. There are some great groups around today, but it doesn't compare to the older days of punk rock.

Even though classic punk informs your sound, songs like 'Can't Sleep It Off' have choruses that open up with huge hooks. How important is that aspect of the songwriting to you?

It's very important. It's the magic I like to hear when I'm listening to a song, even if it's not one of ours. Drive A isn't that technical of a band anyway. We aren't interested in that stuff. We aren't nerdy about our playing. We care more about the song, and making something memorable.

The choruses on 'Loss of Desire' definitely get stuck in your head.

That's what we want so I'm glad you say that.

People always say that the way to build an audience is to pound the touring circuit. Since you've been living out of a suitcase for well over a year now, do you find it to finally start paying off?

Being out on the road so much this past year has definitely paid off. We are starting to go back to some of these cities, and seeing kids wearing Drive A shirts. That blows my mind! We recently hit Canada for the first time and a lot of the people in the crown already knew the words to some of our songs. We couldn't believe that! It's nice to see the word of mouth for the band spreading out. The inside of the bus is home for now.

Being young and in a band that's constantly on tour, how hard is it to refrain from partying every night?

The rest of the band drinks, but I'm straight edge. They definitely party, but not every night. Even though I don't drink, I still like to have fun with everyone. It's great to hang with the other bands and their crews. There are times when it wears on you, but my band is pretty respectful about it. They don't overdo it all the time. Everyone in our camp understands that we are out on the road for our music, and whatever else comes way after.

You recently finished a tour with the Used, and now you are out with HIM. Is there an obvious difference with the reaction you're getting this time out?

With HIM, I'd say about half of the crowd likes us. Winning over The Used fans was much easier. On this HIM tour, there are these old fat ladies who hate our band [laughter]. I always go out into the crowd when we are playing, and those older chicks don't really like that. The HIM guys are awesome to us, but a lot of their fans haven't been receptive to our music yet. That just makes us work harder.

Your manager, Tim Dralle, is a veteran of the rock scene, and has seen a lot in his time. How much as he helped you personally?

He's been really great to us. It's also nice to have someone who was part of the old punk rock days. He was in a band called Manimals back in the day. He's worked with a lot of bands, so he has a lot of experience on the road. Actually, our entire crew is like family, and we all look out for each other.