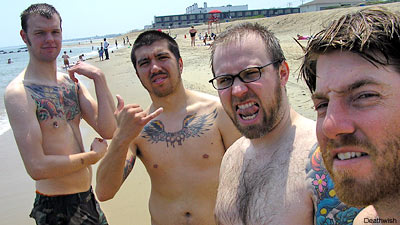 Don't be surprised to see less and less of Doomriders in the future, because Cave In -- drummer J.R. Conners' primary band -- have recently ended a three-year hiatus and are planning to record and tour. Not to mention Doomriders frontman Nate Newton's primary band, Converge, has a new record coming out as well. Not that anyone will be disappointed that Cave In are active again and Converge are up to their usual business of pumping out the best progressive hardcore tunes this side of 1994. But Doomriders' constant presence will be missed, unless Conners and Newton can figure out a way to juggle their busy schedules.

Newton told Noisecreep back in April that their forthcoming sophomore effort, 'Darkness Come Alive,' "doesn't have quite as much of the 'fun' vibe [as our first album, 'Black Thunder.'] It's a little more serious." Listening to the two preview tracks that are available from the band's label, Deathwish, and gazing at the album's cover art certainly support Newton's comments. The tracks are all business and quite insistent, while the artwork's monochromatic watercolor style is much more grave than the neon green and purple of 'Black Thunder.' 'Darkness Come Alive' is out Sept. 29.

Filed Under: cave in, CaveIn, Converge, doomriders
Categories: News
Comments
Leave A Comment
Back To Top