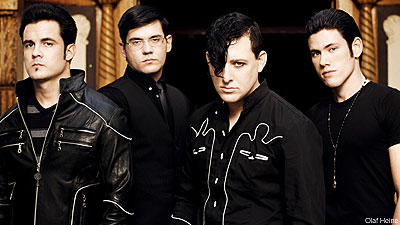 California's Dommin have landed a couple of coveted opening tours to coincide with the release of their album, 'Love Is Gone,' on Roadrunner. The lovelorn rockers just kicked off a month-long stint in Europe again with Italy's Lacuna Coil that began in Holland on Feb. 7 and runs until March 6 in Treviso, Italy. Two days later, they'll join up with Finland's HIM in Hamburg, Germany for some European and U.K. dates, then do their whole North American tour with HIM as well, which ends May 7 in New York.

To stand out, Dommin -- which includes namesake frontman Kristofer Dommin on vocals and guitar, bassist Billy James, keyboardist Konstantine and drummer Cameron Morris -- buy a dozen red roses each gig. And no, they don't give them to the ladies.

"We'll dress the stage with them," says Dommin. "We'll put them on the mic stand. We'll put them on the keyboard. We have a symbol called the 'rose skull' we use when we play live. It's a blend of a rose and a skull. It's the whole idea of love and beauty and also being very dangerous at the same time."

Their Web site, 'Love Is Gone' video promo, album cover and CD insert all feature a white rose with black stem, and they have a banner featuring the 'rose skull.'

"As a band getting 30 minutes to play on stage opening for bigger acts, we want to give people an experience rather than four dudes onstage playing their instruments," explains Dommin. "We try to do what we can with the little money that we have, and little time that we have, so we do anything we can do to dress up the stage and give people a visual experience, as well as sonic experience."

The tour is so extensive -- 59 shows in three months -- that Dommin will spend most of their time inside a venue or inside a vehicle.

"You don't really get a chance to see anything," Dommin admits. "Before touring, I was definitely not well-traveled at all, and now I can say I've been to tons of different places. But in some ways, I haven't really been able to experience those places. You get to the venue and walk a block, and that's your experience of whatever city you're in."