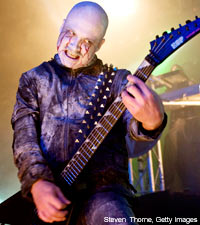 Dimmu Borgir have worked with orchestras before, but for their ninth release and follow-up to 2007's 'In Sorte Diaboli,' the band is really stressing the symphonic component of symphonic death metal.

"There have been several attempts of dressing up rock bands in suits, bow ties and symphonic splendor -- to various degrees of success. Working with Dimmu Borgir is quite different," said Gtoraas. "Their music is epic, thematic and symphonic already from the creation; they are clearly having an orchestral approach to composing.

"My role in this is sometimes just to transcribe their themes, sometimes to take their ideas, tear them apart and build them back up in ways that are true to the band's intentions. The music must also be both interesting and playable for the musicians, and hopefully, meet the quality standards of the orchestral world."

The record is tentatively scheduled for release in North America on Oct. 12.